So as you may have read in an earlier post, I was pretty excited when DJI announced a new drone, the Mavic Air.  The announcement came just as I was finishing another post about how the Mavic Pro just wasn’t working well for backpacking & hiking trips.

I’ve been traveling with the Mavic Air for four months now so let’s get right to it.

First a disclaimer: This Mavic Air review is from the perspective of a professional photographer.  My primary business is not drone flying, neither photo nor video, and this is also not for a hobby.  I have used them for paid work and consider them a tool for my camera bag, not my primary discipline.

Why choose the Mavic Air?

For me, the choice was all about size, access, and photographic capability.  The thing is smaller than a Nalgene bottle!

The Mavic Pro was just too large to fit in my hip bag along with my camera gear.  So it lived in my backpack.  And as I’ve mentioned many times, if camera gear is buried in my backpack and not in front of me I’m less likely to use it.

The Spark would have been a perfect size if the arms folded, but the camera & processor don’t leave you any options for post-processing.  JPG only, 1080HD at 30 frames per second, with no flat color profiles. 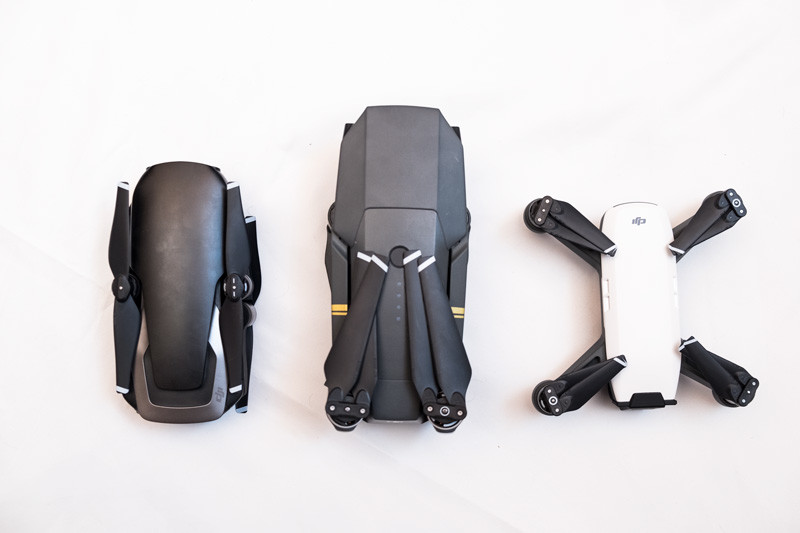 Advantages traveling with the Mavic Air

In addition to the items discussed in more detail below, better design features of the Mavic Air include: 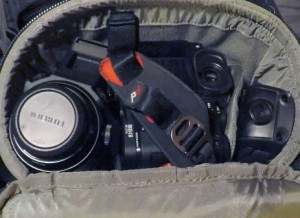 The Air takes up no room in my Speed Demon bag

This is exactly what I needed.  The Mavic Air is extremely compact – it’s not dramatically smaller than the Mavic Pro, but it crosses that threshold to where I can now keep it in my small camera bags or even a pocket where I’m more likely to use it.

I can’t say the gimbal is “stronger” or “less fragile” – gimbals are fragile – but this one lives in a more protected cage with less exposed parts.

The plastic gimbal cover is so much easier to install & take off than the gimbal lock on the Mavic Pro and this one covers the entire compartment to keep dirt out of the sensitive areas. 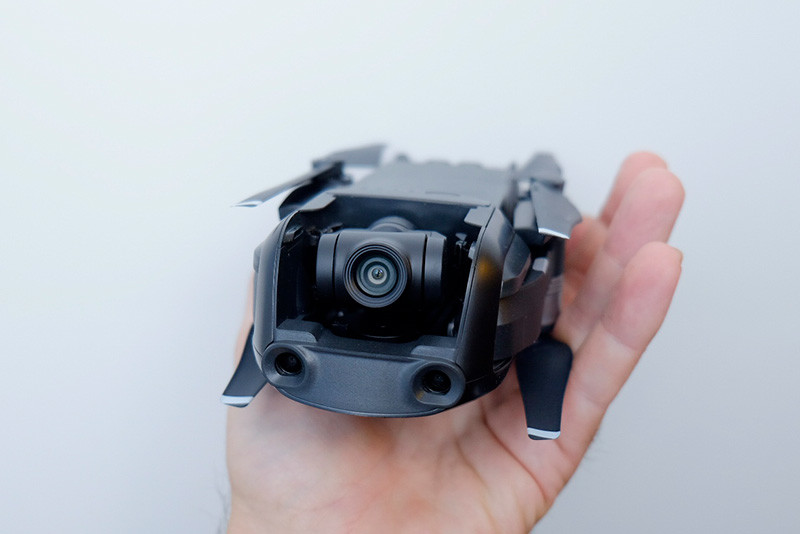 The Air adds rearward sensors in addition to the standard forward and downward sensors.

Also, the Air features something called an Advanced Pilot Assistance System, or APAS.  APAS uses the sensors to build a 3D model of the environment around the drone and creates a safe flight path.  I’ve found that it actually works great around obstacles like trees, branches, and small rocks.  Larger obstacles prevent it from determining a safe flight path, so it will stop.  Still, this is a good addition to flight modes like tracking. 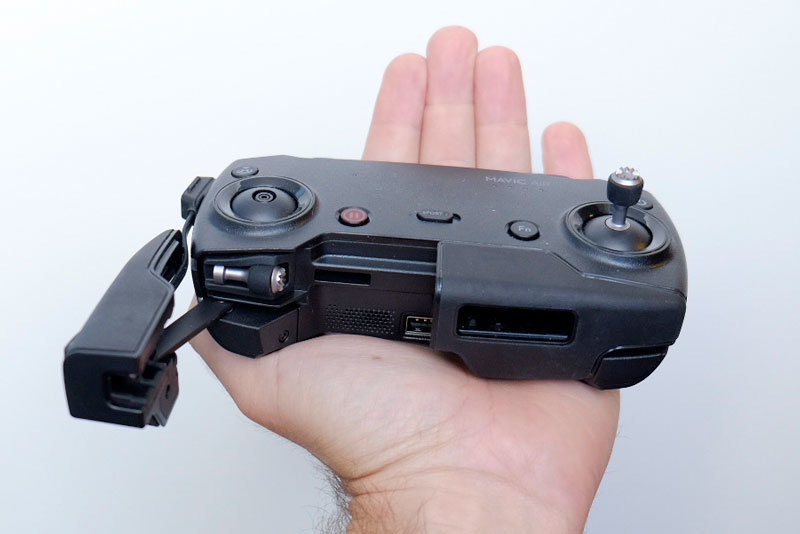 Disadvantages traveling with the Mavic Air

The Spark could be charged via USB-C.  I was super excited about the Air and assumed I could also charge it with something like the Anker PowerCore but this isn’t the case.  You’ll still need to carry all of the batteries you expect to use, and/or portable AC power packs & charging cables.

The batteries are still really small and light.  Battery life is advertised as 21 minutes; I realistically got 15 minutes in Caribbean tradewinds.  The batteries seem excessively expensive at just under $80 a piece.

The Mavic Air is loud.  I was surprised at how high-pitched it is.  It seems to get louder every time I use it.

You’ll see less than scientific “noise tests” online where people measure the Mavic Air at 99 decibels and the Mavic Pro at 98 decibels.  It’s a small difference, but the scale is logarithmic rather than linear.  And the higher whiny pitch makes it appear even louder.

This doesn’t fit well with my “leave no trace and don’t annoy other people” philosophy while backpacking.  It annoys even me, which makes me wonder how much it’s annoying people around me.

A big part of why I bought the Mavic Air was to take on my sailing trips to the Caribbean.  I thought I’d be able to launch the Mavic Air from the boat while sailing or at anchor.

Turns out there were only a couple of days I was able to fly it during my five weeks in the boatyard in St. Kitts.  Winds were the typical springtime 15 knots or so.  The Mavic Air’s wind rating is 24 mph or 20 knots.

The gimbal was fairly stable but not steady – the frame wasn’t jittery but it still noticeably floated around.  This can be fixed in post but crops the frame considerably.

The Mavic Air also bounced all over too much to safely catch by hand (which isn’t recommended, by the way), especially from a rolling sailboat at sea.  When launching it by hand in those conditions, my heart would always jump as it would figure out how to react to the wind.

So, scratch that idea.

The Mavic Air controller has four controls for the camera: start/stop video, capture photo, one wheel, and one customizable button.

The Mavic Pro controller has seven customizable buttons plus an additional wheel.

I had to program the one wheel on the Mavic Air controller to adjust gimbal pitch because doing that via the screen isn’t smooth enough.  So far, the best purpose I’ve found for the one button is to reset the gimbal pitch.

This means that everything else – anything and everything relating to exposure settings – has to be done via the app screen.  The inconvenience of navigating those settings isn’t terribly bad, but what’s worse is that you have to stop flying the drone to change those settings as you take your thumbs off the control sticks.

This lack of camera control bothers me, a photographer, more and more every time I use it. 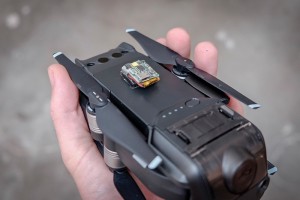 The main advantage of the Mavic Air is also one of its biggest restrictions.  The Air is so small that it quickly disappears, especially up against dark trees or mountains.

I put a Strobon micro strobe light on the Air to increase visibility and you can see how that worked in this post.

The small size also contributes to its instability in high winds.

My own conclusions hiking & traveling with the Mavic Air

So here’s the nice thing about the Mavic Air: it doesn’t take up any room.  Throw it in your pack or your pocket, take it out when an opportunity presents itself, and you’re ready to fly.

I really want to love the Mavic Air but I’m honestly reconsidering going back to the Mavic Pro.  I would do this because:

But the Mavic Air is just so…small and convenient.  Again, perfect for throwing into my camera bag while I’m backpacking.

The Mavic Air is available at Amazon and B&H Photo Video.

Update 8/16/2018: As much fun as I had with the Mavic Air, I regret selling my Mavic Pro.  I will be going back to the Mavic Pro as my primary travel drone.  Read more about this decision here.

What do you think?  Would the Mavic Air be a good travel drone for you?

John, I did get the Fly More combo, for just the reasons you mentioned. There's no way that someone doing more than hobby flying can get away with one battery and a hobbyist will get annoyed with the limited flight time, followed by the wait for a full charge. It also comes with the carry bag for the drone, controller, batteries and charger. Later, I ordered a 12V car charger, so I can keep charging while on the road.

My experience is that the Air maintains in a breeze pretty well and takes clear photos while dodging around (with good lighting). With stills, I take several from a position, to find the clearest one in post. I have added Cree Strobon's - white on top and bottom (Velcro on each battery), red on left, green on right (just below the serial number sticker) and it is definitely visible within a reasonable distance. I never play the Beyond LOS game, so it's plenty for most daylight and it's visible far away at twilight. It's blinding trying to start and shut down in that timeframe.

To your point and question, I do feel that the Air is a reasonable travel drone. I guess it depends on what a person is going to do and how much bulk is acceptable. For travel by vehicle, even a Phantom is okay. For hiking and air travel, smaller is better, including smaller batteries and smaller chargers. Some pros have several, depending on the need. Currently, the Air is all that I need. Its size is fantastic and the output is as good as I have needed.

It certainly is a good travel drone, but I think it’s at the point of diminishing returns for what I want out of a travel drone I can use for professional purposes. Again, for what I need out of a portable drone. I’ll keep my fingers crossed for the expected Mavic Pro 2 announcement coming later this month!