To view all images from this segment, and/or to purchase prints, visit my John Muir Trail: Yosemite to Red’s Meadow photo gallery.

Not every mile is represented in the photos for one reason or another.  Direct journal entries in italics.

My camera had a catastrophic electrical failure the day before my permit started (which was two days before the rest of the group yet to arrive in Yosemite).  I found cell service, overnighted a new camera to my parents from Amazon, and they delivered it to one of the hikers the night before everyone else left for Yosemite.  Phew!

The Lyell Fork of the Tuolumne River has an amazing emerald green color the entire way through Lyell Canyon, with the occasional deep swimming hole to cool off. Mile 26.

The John Muir Trail/Pacific Crest Trail follows the Lyell Fork through most of Lyell Canyon. Mile 28.

“Continued south thru Lyell Canyon.  Stopped at cascades just south of Ireland Creek for a break and soak the feet.”

At some points along the Lyell Fork, the river takes a break from its course through the meadow to cascade down granite slabs. Mile 29.

Many stream/river crossings on the John Muir Trail can be made with dry feet, if you find the right place to cross and don’t fall! Mile 30.

“Past Ireland Creek another cool meadow with deer.”

Mile 32: Lyell Fork of the Tuolumne

The clear waters of the Lyell Fork of the Tuolumne River look extremely inviting for a dip! Mile 32.

“Then started climb up towards Donahue Pass.  Great views of the meadow below, Mt. Lyell & Lyell Glacier.  Tough switchbacks.  Found big campsite along Maclure Creek near footbridge.  Mosquitos from hell!  Where is your head net?”

Don’t forget to look back! Hiking up Lyell Canyon yields views of the meadow you just hiked through a few miles ago. Mile 34. Mile 36: Under & Over Donahue Pass

Red Mountain Heather in the meadow on the east side of Donahue Pass, headed towards Rush Creek. Mile 37.

“Started up Island Pass, top was amazing with clear lakes and Banner Peak right behind them.” I didn’t count the islands, but there are a lot in Thousand Island Lake. Mile 42.

“Picked out camp at Emerald Lake.  Mosquitos worse than I’ve ever experienced.  At least 30 came in my tent with me.  Climbed talus slope for views of Ritters and Thousand Island Lake.  Came down and after dinner heavy smoke from that direction.”

“Left Emerald Lake before everyone else to escape the bloodsuckers.  Passed Ruby Lake as sun was hitting the wall behind the lake.  Climb out not too bad – shallow switchbacks through thick forest.”

Reflections of the cliffs and snow surrounding Ruby Lake. Mile 44.

“Descended into Garnet Lake – great views with Banner behind it.”

Old logs sit in the shallow waters of Garnet Lake, on the east shore near the bridge crossing. Banner Peak and Mount Ritter in the background. Mile 45.

Mile 46: Descending Out of Garnet Lake

The rocky switchbacks leading south on the pass out of Garnet Lake. Mile 46.

Small cascades on Shadow Creek, which originates in the Ritter Range. Mile 48.

The trail pops out of the woods on the west side of Shadow Lake and then climbs up some never-ending switchbacks south towards Rosalie Lake. Mile 49.

Mile 50: Climbing out of Shadow Lake

“Climb out was strenuous – switchbacks never ended, but was shaded.”

The steep, endless switchbacks leading out of Shadow Lake. Mile 50.

“Came down into Rosalie – great camp spot, many hikers there.  At Gladys Lake decided to continue to make progress towards Reds, stopping at two ponds unsuitable for camping.” One of the many small lakes that the John Muir Trail passes by. Rosalie Lake, Mile 51.

“Found spot at Johnston Meadow.  Hardly any bugs here!  Great private swim hole behind us at Minaret Creek.  Can’t believe the trash on the trail – people come here to enjoy this place, and leave trash?  Collected 1/2 bear canister of it (almost).”

Minaret Creek flowing below our campsite near Johnston Meadow. Mile 57.

“I’m the only one in the group with no blisters!  Left Johnston Meadow for downhill into Devil’s Postpile – crazy trees toppled from November 2011 windstorm.” Trees felled by “The Devil’s Windstorm” on November 30, 2011. Thousands of giant trees were uprooted when winds exceeding 125 miles per hour suddenly blew out of the northeast. Mile 58. 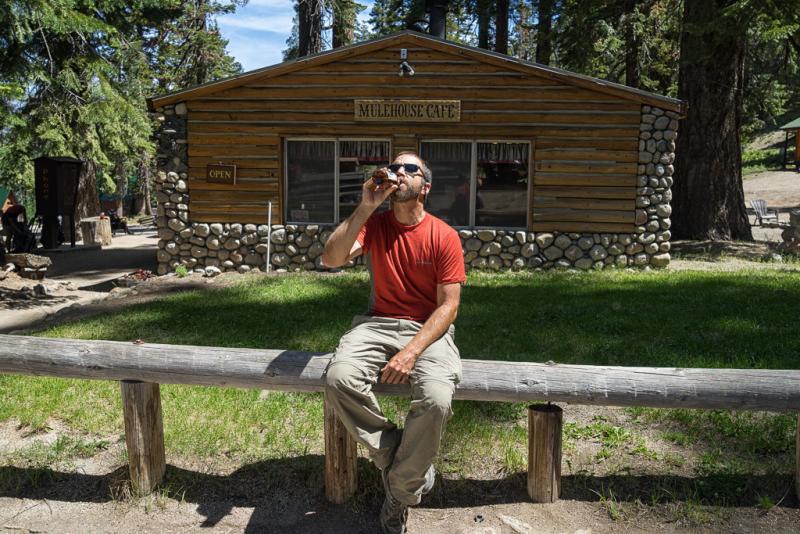 To view all images from this segment, and/or to purchase prints, visit my John Muir Trail: Yosemite to Red’s Meadow gallery.