Fear not the Black Bear!

Your chances of seeing a black bear while even doing just a short hike in Lake Tahoe are pretty good!

Don’t be scared and don’t panic.  Seeing a bear during your hike should be a highlight of the trip, not ruin it.  They’re not carnivorous killers but they’re also not Disney animals.  Treat them with the respect they deserve and they’ll show you the same courtesy.

The best advice I got when I was a young Boy Scout camping in Lake Tahoe was, “If you’re being chased by a bear, climb a tree.  If it follows you up, it’s a black bear and not a brown bear.”  Yeah, thanks. 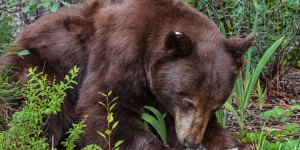 Black bears aren’t always black – most of the bears in the Tahoe area are anywhere from a light cinnamon color to black (so don’t freak out when you see a brown one thinking it’s a different species).

They’re highly intelligent, strong, social animals with very predictable behavior, and that should put you at ease.  Just don’t think you can beat them at a foot race unless you can run 40 miles per hour.

There have been no fatal black bear attacks in California or Nevada since record-keeping began, though there have been fatal attacks elsewhere as recent as 2017.  You’re statistically more likely to be eaten by a shark or struck by lightning than attacked by a black bear, but don’t think that this will make you invulnerable.

Black bears are inherently afraid of humans, though years of careless human behavior have made them habituated and less afraid of humans.  They know that they can usually find food wherever we are.

One common myth is that the most dangerous bear is a mom with cubs.  This is not true with black bears, especially if you follow the advice here.  When a sow with cubs encounters a human, she’ll send the cubs up the tree for protection and then stand guard at the base of the tree.  If you’re too close she will make huffing noises and slam the ground with her paws to let you know you need to leave.  Honor her request and you’ll be fine.

Planning to See Black Bears On the Hiking Trail

It’s always good practice to hike in groups.  Strength in numbers – the bears definitely won’t want to mess with more than one person.  You should also be talking to each other so that the bears aren’t surprised by your arrival.  They’ll usually retreat if they hear you coming.

If you are alone, make noise somehow.  I’m purposefully a klutz when hiking through scrub alone, where I think I might surprise a bear.  I pound my feet, break sticks, hit rocks with my hiking poles, talk to myself, and so on. 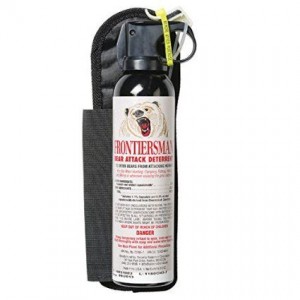 is a good last-ditch deterrent.  And much safer for both parties than guns.  It only works if it’s accessible; I’ve hiked with people who keep them deep in their packs, totally useless!

“Excuse me Mr. Bear, hold still while I dig my spray out of the bottom of my pack.”

The product linked here comes with a belt holster – use it.

One word of caution regarding pepper spray.  Some people think it will also deter bears if you spray it on your tent and camp gear.  NO NO NO!  The bears are actually attracted to the scent of the spray and they will make a meal of your tent.  You don’t want to be inside when this happens.  It only works when sprayed directly into their face.

Bear spray is also illegal in some places like Yosemite.  Check before you go.

Do you need bear spray in Lake Tahoe?  I get this question a lot.  The short answer is no, so long as you show proper respect towards the bears.  Many people say that bears in Lake Tahoe are different than other black bears; they’re nicer and don’t attack.  While that’s generally true (less an attack last year), it’s only true because Lake Tahoe bears are trash bears.  They’re not aggressive towards people because they know they can stroll down the street and eat trash that irresponsible home & business owners have left out.  That’s all they want.

You should always be paying attention to your surroundings – look ahead, behind, and even above you.  If a black bear hears you coming he may retreat into a tree above the trail.  Sorry but no headphones.  You need to use all of your senses.

Dogs should be on a leash.  They may scare a bear away, but they may also make the situation worse.  You won’t know until it’s too late. 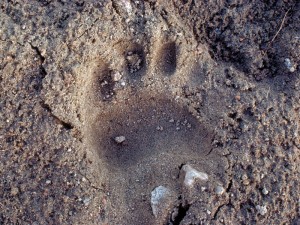 Look for signs of bears.  I’ve found that bear tracks and scat are the easiest ways to identify them.  Food comes out a bear’s ass-end looking almost the same way as it did going into its front end.  You’ll see large piles of berries or whatever else it found to eat.

If you do find signs of black bears, it’s also probably a good idea not to set up camp there!

If You See A Black Bear on the Hiking Trail

Do not approach the bear!

Many black bear attacks happen when people get too close for a photo op, or worse yet, a selfie with a bear (yes, that’s really a problem here in Tahoe!).  We want to avoid black bear attacks.  Slowly back away, keep your eyes on the bear, and go around a different direction.  Give the bear a wide berth.  A black bear will normally retreat at this point.

A bear will let you know that you’re too close if it’s defending food.  It doesn’t want to fight either!  It will bow its head, swat at the ground, huff and snort, and may even lunge in a fake charge.  Do as they ask and back away slowly.  Get out of their “bubble”.  This also goes for the aforementioned situation when a sow trees its cubs.

If the bear stands up on its hind legs, that is not a sign of aggression.  He’s only curious and checking you out.

If the bear doesn’t retreat or it starts to follow you, you need to stand your ground, make yourself look big, and make loud noises.  Yell, stomp your feet, and tell the bear you’re in charge.  You have to let black bears know that you’re the boss and will fight back.  Do not run!  Doing so will elicit a chase instinct in the bear.

Get the bear spray ready – take it out of the holster and remove the trigger guard.  If the bear does come towards you, aim it just above its head and pull the trigger.  The spray is good to about 35 feet.

If the bear continues with the attack, don’t play dead!  Fight back aggressively with hiking poles, rocks, sticks, whatever else you can use, aiming at the face.  It really is effective as many people have been able to survive black bear attacks by doing this.

A black bear will not just wander into your camp unless you set up camp in its camp, or something attracted it there.  And that’s almost always a scent.  Their sense of smell is amazing!  Seven times more powerful than a dog. 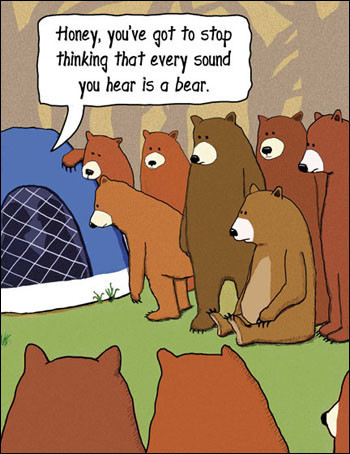 You should always have your “sleeping” campsite and your “kitchen” campsite.  Do not cook or do dishes from your tent.  Food particles will find their way to the ground and the smells will embed in the fabric.

If you’re cooking something very smokey and delicious, it’s even a good idea to cook in separate clothes that you can store in a food container.

Speaking of food storage – know the rules before you go.  Some areas require hikers to carry bear-proof food containers.  Other campsites have built-in food storage lockers.

It’s a good idea to always store your food in a container even if the rules don’t require one (marmots are amazing little thieves).  Some ranger stations will have them for available for free or for a fee.

I use the BearVault.  It also doubles as a great camp seat!  The smaller canister is good for outings up to four days long, for anything longer you’ll need the BearVault 500.

You should put everything that smells inside of this container, even your chapstick.  Do not store these containers near your tent.  They should be at least 100 yards away from your sleeping site.

If you don’t have a food storage container, you’ll need to hang your scented items in a “bear bag” as a last resort.  These worked decades ago when I was a Boy Scout but the bears have figured them out now.  You’ll need a stuff sack and a length of rope, thrown over a tree limb at least five feet from the trunk and twenty feet in the air.

A bear trying to figure out the BearVault.  Wish I had opposable thumbs!

Don’t like mosquitos?  Well, bears love citronella.  This goes for the candles and natural insect repellents that contain citronella.

If a bear is in your camp and won’t leave, make yourself look big, make loud noises, and stand your ground.  It’ll eventually leave.  You can then go back to your tent where you will won’t be able to fall asleep for the rest of the night…

Great article! This was great to read as I am a new Backpacker heading up to Desolation Wilderness. One question. I noticed in the video whoever was filming remains very quiet and seemingly hidden in their tent. Although I assume this encounter turned out as well as it could would it have been advisable for them to yell, clap, stomp and make noise to try to scare the bear away? Or had the bear gotten any closer to their tent would it have been advisable to use the bear spray at that point?

Thanks for the feedback Mark, and have fun in Desolation! Our bears have been very active around Tahoe lately, but they mostly stay near homes & established campgrounds where all the food is. Yeah, I think whoever was filming this was letting it go on for a "this would be awesome for YouTube" thing. The bears are generally chicken when people start making loud noises. Unless they're actually in the process of eating, then no noises are going to make them go away. But I think in this case some loud noises would have scared the bear away before having to resort to spray.