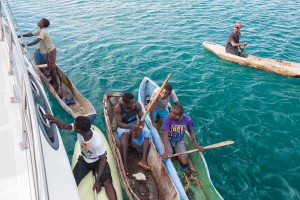 I’m back!  I haven’t been to the small Haitian island of Ile A Vache for two years.  Still, the first islander in a dugout canoe to come greet us saw me standing on deck and yelled, “Mr. John!”  Almost made me cry.  Then another boy came out in a canoe, yelled “John!”, and gave me a high five.  Two years.  And I was only here for a week then.

It took us five days to sail here from St. Croix and was a fairly uneventful passage.  After leaving St. Croix we went to Puerto Rico for a fuel stop.  We rounded Isla Caja de Muertos early in the morning and went into Ponce.  It seemed like just a few days ago I was there last.  I remembered exactly where I was anchored and wanted to look for my boat, but it’s not in Puerto Rico right now.  Good thing it’s not, otherwise I might jump back on it during our return.

I had the 1 A.M. watch.  The ocean always seems to seduce me at night.  Maybe it’s the mystery of a moonless night, of not being able to see more than a few feet in front of me and not knowing what the bow is plowing into.  It brought back some fond memories from a few years ago.  Memories of getting slapped in the face by my staysail during a midnight squall in the Mona Passage and losing an expensive pair of glasses overboard, which was the least of my worries since the boat was heeled over considerably and I was at risk of getting knocked down; memories of an extremely beautiful starry night near Puerto Rico when I had the epiphany that my journey should be a marathon and not a sprint; and memories of waking up from a nap during a night passage in the Dominican Republic and finding a giant freighter a half mile from me – a half mile at night might as well be five feet when you first see it, and are delirious from lack of sleep. 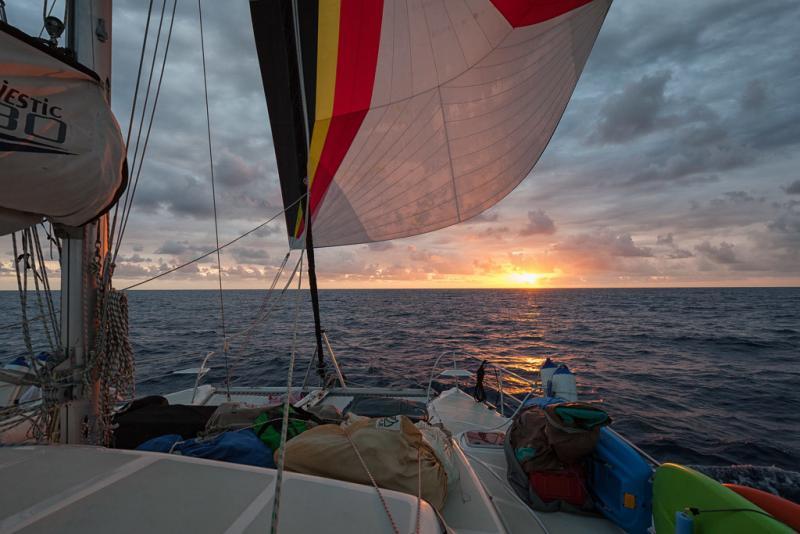 Sunset during our westbound crossing of the Mona Passage.

I quickly progressed through Gardner McKay’s memoirs, Journey Without a Map.  It’s a good book to read while sailing and the more I read the more I see the parallels in our philosophies.  Don’t be a slave to society’s expectations for you to be a suit-wearing, career-oriented, briefcase-carrying sheep if that’s not what you want to do.  Go find your own path and if things aren’t working out for you, make a new path and find something else that makes you happy.  There’s too much to do in too little time.  I just finished the part where he quits his popular TV show in Hollywood, starts from scratch, and crews various schooners through the West Indies and down island to South America.  Sounds familiar, except for me it was flying fighters in the Air Force instead of acting in Hollywood. 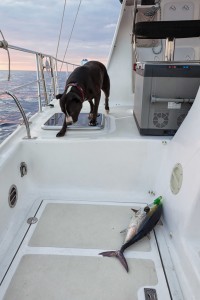 Crewman George not quite sure what to think of the tuna we just caught.

We trolled for fish the entire way but didn’t catch anything until the fourth day, when we had three consecutive hits near Piedra Negra, the southernmost point of the Dominican Republic.  A few miles from where the Dominican coast guard threatened to arrest me under the accusation that I was a murderous, thieving drug runner.  Anyways…the first fish didn’t want to come in; I imagined I had hooked a giant mahi mahi, my favorite kind of fish, but whatever it was snapped the line and got away with the lure.  Shortly after putting a new lure on that line, our other line got a hit.  While Captain Wayne was pulling in what would turn out to be a small but plump blackfin tuna, the line with the new lure got another hit.  I brought in one of the biggest barracuda I’ve seen on that line, and so we threw that one back.  Bad catches two out of three, maybe I’m bad luck when it comes to fishing.  But the tuna was delicious.

I’m like a child who forgets his lesson after touching a hot stove.  I’ve had some nice rope burns in the past from handling sails without gloves.  So when we had to douse the spinnaker one night, I naturally ran up to the foredeck without putting gloves on and lost a nice deep chunk of skin from my index finger.  That won’t happen again, until next time.

I learned a little Haitian Creole during the passage.  Last time I was here I got by with speaking English and French, but it was difficult.  Knowing a little bit of French did help, because the Haitians took French words, chopped off parts of them, and then spelled them phonetically.  The words look nothing like French, they look more like some African language, but when spoken it’s easy to hear the French roots.  And now for the practical test!

We’re resting the rest of the day and starting work tomorrow. 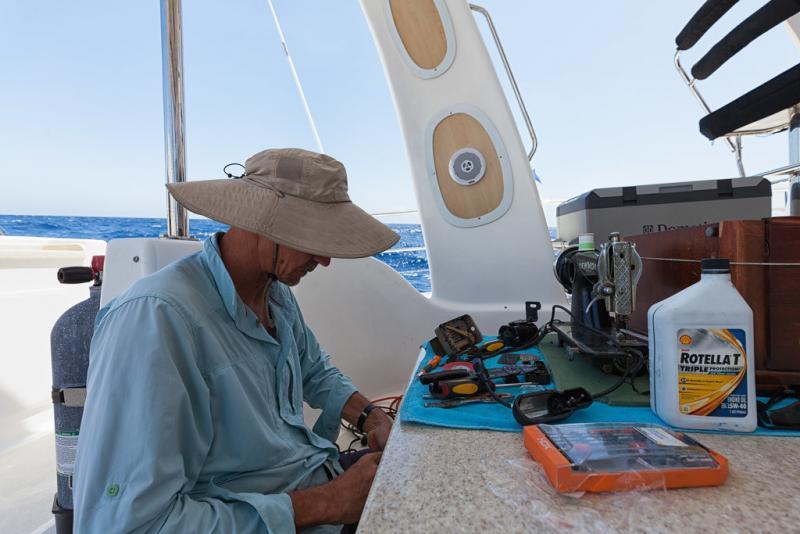 Jan repairing one of the sewing machines during our sail. These will be donated to the Haitians.