This post has been updated on January 7th, 2016 after 3,000 miles sailed with this equipment – the update is at the bottom.

Merry Christmas to me! The package I had been patiently waiting on finally arrived. From the title of this post, you can probably assume that it has something to do with wind and power. And it couldn’t have arrived at a better time – I’ve been itching to say goodbye to Marsh Harbour and spend Christmas in Hope Town before continuing further south on my voyage. 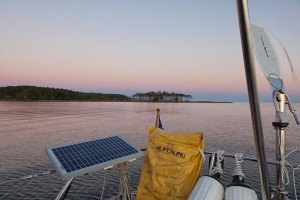 Anchored off of Broad Creek (the Neuse, not the Pamlico) the night before heading offshore through Beaufort Inlet.

My solar panels have been decent. I have two 25-watt marine solar panels on articulating mounts on my stern rail, where most sailboat solar panels are mounted, and a “roving” 50-watt panel that I can move around deck to follow the sun.  This one is plugged into a socket I installed in the cockpit.

The smaller panels combined can in theory generate enough electricity to power my refrigerator, anchor light, water & bilge pumps, and cabin lights. Add the bigger panel and now I have electricity for my VHF radio, radar, laptop, DVD player, and all the other miscellaneous stuff with a little electricity left over to put in the bank.

But that’s on what I call a “perfect solar panel day”, when winds are out of the east-northeast and clouds stay away from the sun. I point my panels towards the south where the winter sun hangs low for the nine-hour day, and the panels get good exposure almost the entire day. It gets even better when the days are longer and the sun hangs higher.

The reality is that only one out of every ten days is a “perfect solar panel day”. I often have a hard time distinguishing between reality and my fantasy life, but reality finally got a hold of me on this one. Clouds come and go, shifting winds move the boat and panels at less than ideal angles to the sun, and shadows are a problem when the sun is really low.

Then there’s the problem of overcast days. And night. When my batteries are fully topped off, I have enough electricity to go for four days without getting any kind of charge whatsoever on my average daily consumption. I can use less if I need to. But then I can’t get the batteries topped off again without running the engine for hours at a time.

Batteries tend to die a lot quicker when they’re discharged to 50% and then not immediately topped off again or not at all. I needed another way. I felt like I was living paycheck-to-paycheck as far as my electricity was concerned.  One of the realities of a sailboat cruising lifestyle.

I actually equate sailboat electrical systems to a monetary budget.  Except you can’t use credit.  You only have a finite amount available, you need to keep some sort of overdraft protection in the account, and you don’t know when the next paycheck will come in. 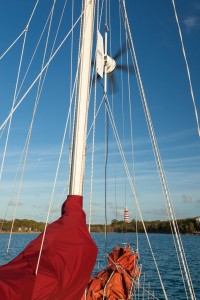 The wind generator hanging about twelve feet off the deck and held stable by three lines. Elbow Cay Light in the background.

The Aquair100 was recommended by self-sufficient, small-boat long-distance sailors as a good sailboat wind generator. It’s a small six-blade unit, about three feet in diameter. I didn’t want to shell out the dough for a huge stern-mounted turbine that could power a small Caribbean village. Quite a few voyaging boats have those.

Many marine wind generators need some good winds to get going, but once they’re going, your electricity worries are over. The Aquair will start turning in lighter winds, but its output is less. That’s fine with me, as I only need something to augment my stern-mounted panels.

In typical tradewind speeds, this turbine will output slightly more than my roving 50W solar panel but for 24 hours a day. One of the neat things about it is that there’s no permanent installation – no more holes drilled and no more eyesore mounting poles cluttering up the boat.  It does qualify as a portable wind generator.  I hoist it up my inner forestay using my staysail halyard, where it hangs high up on the mast and without any other structure of the boat in front of it to create turbulent winds. I rewired the waterproof socket in my cockpit to now accept this turbine instead of my 50W solar panel. After dropping anchor, I carry the small unit out of my v-berth, plug it in, raise it up, and tie down the lower half so it won’t swing. Voila. 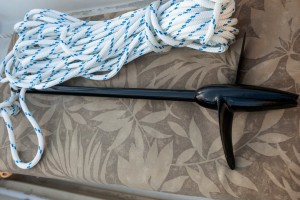 And it gets better. You’re thinking “well, if it’s in your rigging, you can’t use it while you’re sailing, so what good is it?” No worries. I can remove the fan blade disc and halyard mounting poles, move the generator unit to the stern, tie one end of a 100′ line to the shaft, and drop the other end of the line in the water. The other end has a small weighted propeller on it, and now it becomes a towed water turbine generator. I can use this on long sails or when I need more help topping off the batteries on shorter sails. Towing this convertible turbine will generate more electricity than if I had a similar wind turbine mounted above deck.  One more way of getting marine renewable energy.

I’ve only had one day & night of decent winds since receiving it on the 22nd, but it has worked great for that period.  It’s much more quiet than the larger pole-mounted units, making just a whisper.  Time to live in electrical luxury!

The short of it is, the Aquair functions wonderfully as a towed generator, but I’m not too happy with it as a wind generator. I was not being realistic with my expectations – they turned out to be way too high!

While my current, updated solar panel setup is still just barely enough to keep me going in perfect sunny conditions after adding a watermaker, I don’t want to rely on solar too much and still want a wind option for days I’m not getting solar.

However, you really need to be in some exposed anchorages to make the Aquair wind generator put out any power worth noting. In protected anchorages in the trades I might get 10 amps in a 24-hour period out of it, unless a storm is blowing through I might get just over double that. By comparison even on cloudy days I’ll still get at least 25 amps out of my solar panels between 0700-1700.

I had considered selling the Aquair but I’m still going to keep it as a towed generator just in case.

Now that wind generators have really proliferated and come down in price since I purchased the Aquair and wrote this post, I’m going to get one of those pole-mount generators to put on the stern.

The popular AIR Breeze Wind Turbine is now cheaper and lighter than the Aquair. It has the same start-up wind speed, but at 25 knots will produce 160 watts while the Aquair only produces 65 watts at the same wind speed. It currently costs around $1,800 with stern mount kit.

It’s all about wattage per dollar, especially in light-moderate winds, and the AIR Breeze and similar generators are king here. They’re now very reliable wind generators for marine applications.

How do you have your electrical system set up?  What works for you?

Have you tried the towed generator? Is it practical?

Hi Robin, great question. Updating this post is next on my to-do list and I'll be addressing that (I wrote it three years ago). Short answer, yes. After having the Aquair now from the Bahamas to Grenada, I'm not very happy with it as a wind generator. In protected anchorages in the trades I might get 10 amps a day out of it. Now that prices have come down on stern-mount wind generators I'll be getting one of those. But I'm definitely going to keep it as a towed generator for long passages! Even though my boat doesn't go too fast to windward, I was still getting around 50 amps a day like that. And on a reach where I do best, I usually have to keep a load on the batteries because it's putting out a good 100 amps a day (my average consumption sailing is around 70A). For shorter passages, like daysails, it's up to you. You really don't want to have it in less than 75' of water because the line is 100' and when you tack and your speed drops, the propeller sinks to the bottom and can snag. It's also not a good idea in coastal areas that have fish pots, crab traps, moorings, buoys, and all other things floating in the water.

A lot of people around the globe are becoming aware of the predicament of our environment. Global warming has become a important issue these days that ever more people are prepared to spend money and effort to do what they are able to to assist cool our planet. Fossil fuel is not any longer a realistic possibility as a supply of energy. Along with solar power, wind power is clean and environment friendly. For this reason alone, millions of Americans are buying home wind power kits so that they will be able to construct their own renewable sources of energy. :

Remember to check into our own online site http://www.caramoan.ph/

Thanks for sharing John.t has been great to watch your journey. I too am on a simulair path as you. I really enjoyed reading this blog about solar power and wind power. It would be nice to see a short video clip on how that wind generator is raised and lowered. Also how it is wired in being portable and all.