It’s Friday morning and I’m sitting here aboard Saoirse monitoring some paint I applied to my samson posts and parts of my bowsprit. It seems it’s not hardening correctly. I mixed that can so much that I could barely lift my arm afterward but hell, it was an opened can of six-year-old paint so what else would I expect. I need to tie my jacklines and ground tackle back on to them in preparation for getting back in the water, but not while it’s still soft. I’ll give it another day.

April 13th now – I’ve been at the boatyard for one month today. If I launched on Monday the 16th I’d be in Dominica by April 19th; winds are forecast to be out of the southeast and that’s where I want to go so it’s not going to be a fun sail.

I’m going to have to be back here in St. Kitts by May 25th for multiple commitments back home. That means that in a perfect world I’d leave Dominica on May 23rd. However, if unfavorable weather is forecast, I could have to leave as early as May 15th to stay ahead of it.

My anticipated two months on the water could potentially be down to just over three weeks.

Where did all this time go?

“I’ll be back in the water within a few days of returning,” I told myself on my way back to the islands. All I had to do was replace some components of my engine fuel system and reseal a hatch lens. Work that should only take a couple of days, but that’s not how sailboats are.

I serviced & replaced everything on the engine that I thought needed servicing.

I re-plumbed my fuel lines into a temporary tank on deck. If you recall, my internal tank needs a professional, thorough cleaning and is useless to me until I do so, but that work can’t be completed on this island for a small 20-gallon tank. I plumbed a temporary tank six years ago during an emergency and it worked just fine. I’ve never done it as my going-out gameplan, but since I would only use the engine for thirty minutes at most upon arriving in Portsmouth, Dominica, I was comfortable going to sea like this.

But my engine still wouldn’t start, and after some troubleshooting, I determined it was the injectors. I took those out of my engine and attempted to clean them but I couldn’t get the damn assemblies apart for cleaning. I spent a few days with a mixture of solvents & heating but they wouldn’t budge. I finally found someone who knew a guy who knew a guy whose cousin knows a guy (or something like that), handed off my injectors, and they quickly came back ready for cleaning. I don’t know what they did and I’m not going to ask any questions. I reinstalled them in the morning and the engine finally fired up by the end of the day. Hooray, let’s go sailing! But first the hatch lens…

That hatch lens was a lucky find. I discovered this potentially disastrous problem the morning I was leaving for the airport on my last trip, during a big rain. Almost the entire lens was lifting up out of the frame – something that could sink my boat in heavy seas. This finally cleared up the mystery of why there was so much water damage in my forecastle after the 2017 hurricane season. I sealed it with tape right before leaving for the airport so I could re-caulk it on this trip. When I finally did remove it, a closer inspection showed some significant cracking in the lens. The cracks didn’t go through the entire thickness of the lens, but they were numerous enough and deep enough to say, “I’m not going into big water like that.” But staying in island lees for 130 miles? Yeah, I’m okay with that, as long as I do so in “comfortable” sailing weather (we’ll get to that). The lens is a special order item that I can’t get here quickly.

During a heavy rain, I made sure my hatch caulking job wasn’t leaking. I did good, but water was seeping in around all sides of the rubber gaskets. The seals for this hatch, and the hatch aft of my mast, are very brittle and not sealing well. An application of Vaseline helped the problem – I keep it in my dive bag to make a better seal between my mustache and dive mask and it works for hatches too. But they’ll definitely need to be replaced before going into heavy seas.

Okay, so I think we’re finally ready for a little shakedown to Dominica. Let’s get the rigging ready to go.

Nope, the mainsail halyard was almost entirely chafed through where I was using some bungees to keep the halyard off the mast. I missed this because for one, it had never been a problem before in six years of doing this, and two, the bungee cord was hiding the chafing. I had already used my spare halyard so now I needed a new one. As is the case with everything else on this island, it took a few days to source a new halyard and have it delivered to the boatyard. Days that would have been great for sailing.

The forecast was calling for some strong, gusty winds with squalls. Near gales. I don’t mind 25-knot wind, but not when I’d be beating directly into it in a boat that hasn’t been to sea for two years. Call me a pansy but that’s my captain’s prerogative and not how I want to conduct a shakedown. Don’t get me wrong – in a stiff wind, this boat moves with just the staysail and a double-reefed main. But I needed a little more confidence in her condition first.

So I took that time to work on various small projects I was going to save until Dominica.

One of those little projects was to remove an old diaphragm-style bilge pump that was in my engine room – er, compartment – and always made access to my rudder shaft more difficult. It was totally defunct and not one of the three working bilge pumps I have aboard. While working on it I found something completely surprising – my transmission cable snapped at the gearbox. I don’t know how it happened. The cable was only seven years old and the break looked really clean, meaning I couldn’t notice any corrosion. I spent a few days trying to come up with a fix for this, again because this is a part that I can’t immediately get here. I came up with a temporary solution, one that would get me to and from Dominica, but not something I wanted to go any further with. 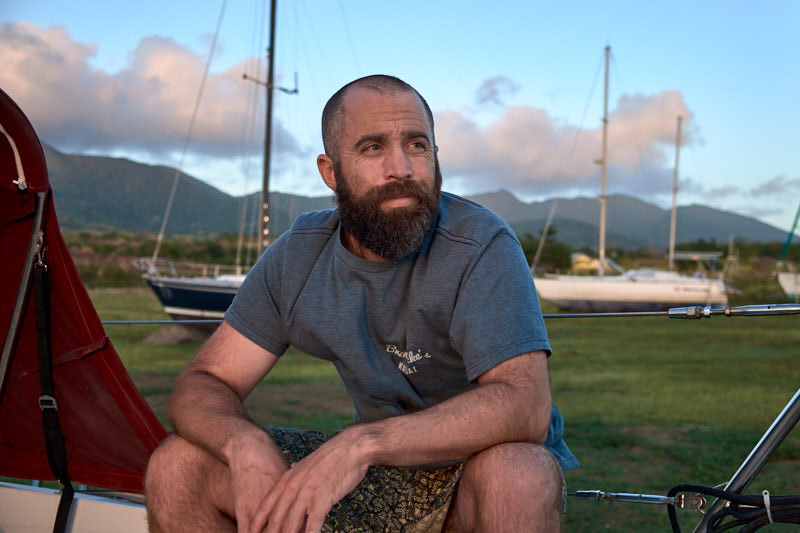 So this has been the cycle. Waiting for weather, fix something that affects safety & seaworthiness. Wait for weather again, find another major issue.

And this is the decision point.

I can put to sea now for who knows what kind of weather I’ll have to Dominica. It changes every hour. If Saoirse only had one band-aid I’d be okay. But with so many things on the “must be fixed before sailing again” list…it’s the cumulative effect, you know? Not to mention I’ll spend $350 for the launch and another $350 for the haul-out potentially as soon as three weeks after launching. This only gets harder to swallow the more I delay for favorable weather. Money that could be spent on new hatch lenses when I’m really ready to go back out. Is it worth it?

Or I can just chalk this up as part of the lifestyle. I felt quite defeated during my trip here last fall, but in the end had a good attitude about it. I was anticipating sailing to Panama on that trip but I was woefully unprepared for the surprises I found after 18 months of storage. Instead, I took inventory of projects that needed completing and cleaned up a good amount. This is why everyone should make it a point to visit their boat at least once a year even if they don’t plan on sailing.  Unfortunately, some life events prevented me from sailing since spring of 2016.

During this trip five months later – well, I just ran out of time. But that’s fine. Progress is still progress, and I have one month of work out of the way that I don’t have to do later. Saoirse is much more “livable” now, as I spent a great deal of time tidying things up inside & out and making her much more comfortable to live in. I got rid of a lot of clutter – things I carried aboard “just in case” but never used and in all reality will probably never use. I improved on a lot of systems in the cockpit and down below that will make my next cruise much more enjoyable. It was a productive month for sure.

That’s just the reality of part-time cruising. Anyone who says they’ve never come into problems in situations like this is lying or hasn’t been doing it long enough (like running aground – those who have and those who will). If we need to attack it piecemeal over a period of a couple years, that’s just what we have to do to keep the dream alive. And you can bet that’s what I’ll continue to do.

Monday is go-no go day. I’m either booking a flight home or putting to sea for a short little shakedown.

In either case, I’ll be back in October to take her to Panama – and I mean it this time.

What do you think? Am I making a big deal out of nothing? Or trying to rationalize a decision that kills me to make?

Postscript Saturday morning – my water pump failed mid-shower last night as I was covered in soap. I’ve already taken that thing apart twice in the past few weeks after it has stopped working. Come on!

Hey John, I think you need the shakedown! The $700 for in/out hurts, but you need some time on the water. Of course, it'll highlight seven or ten more things that need attention before October, but better to shake those loose now, eh? It's like $120/month to get the feel of the sea; like keeping your flight hours current. Don't miss out on that. Or, do you get some day-sailing in with other boats while you're living the life? Do you sail on Tahoe when at home?

Saoirse probably wants on the water too; but, on the other hand, don't let her talk you into something silly... I look forward to your decision.

We do need the shakedown! But unfortunately I’m at the Miami Airport right now and I didn’t sail here. A new major problem exposed itself last night so it’s back to Tahoe for hurricane season. I will go sailing on Tahoe in the meantime now that there’s way more surface area!