So, I’m in the process of buying a sailboat. After putting it off for…oh, about 20 years, I figured it’s about time (I’m only 30; probably why it didn’t happen sooner). 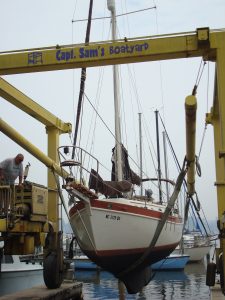 Lowering her back in the water after inspection

Why am I mentioning this on my photography site?  This boat will open up all sorts of opportunities for me.  After months and months of research, I narrowed it down to a few specific models, and one of them showed up for sale an hour from me in Washington (North Carolina), and for a good price. Convenient? Yes.  It’s a Pacific Seacraft Orion 27.

After a few visits, I made an offer, and wanted to get a survey before handing over the check. A survey is similar to a home appraisal. Every single structure & system on the boat is tested & inspected, giving the buyer a reasonable idea of the real value and what needs to be repaired.
Bert Quay of Carolina Yacht Surveys was referred to me by multiple people.  Bert is a full-time, accredited surveyor who has been at the job in North Carolina for over thirty years, longer than any other surveyor in the state.  He joked that it’s because all the other surveyors were smart enough to move on to better jobs; but it’s clear he enjoys his.  He’s straightforward, thorough, experienced, and knows every single dockmaster and boatyard owner in the state. 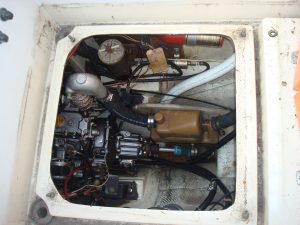 The engine is accessible from either the cabin of the boat or a hatch in the cockpit sole (shown here).

The survey started with an inspection of the engine.

The engine is a 28-year-old Yanmar raw-water cooled 13hp marine diesel.  When these engines are cared for, they’ll last forever.

This engine seemed to be in decent shape.  It’s cooled by seawater pumped through the engine and then into the exhaust.  We noticed that the pump was leaking slightly, but it was nothing to be too alarmed about at the time.

We’ll get back to that later. 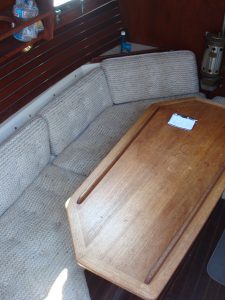 The table lowers to convert into a double berth. The cabin is heated with a propane stove in the background.

We left the slip and motored the 8.5 miles to the boatyard, where we’d haul the boat out of the water and inspect the bottom.  On the way there, Bert inspected the plumbing, deck, and rigging.  The sink foot pump was frozen, as was the valve to discharge waste overboard.

But since I’d be staying in the sound for a little while, I can’t discharge any waste overboard anyways; it needs to be pumped out into a septic system.  I can only discharge overboard once greater than three miles from shore.

We also noticed that when the refrigerator compressor was turned on, it put an excessive load on the engine.  That’ll need some attention. 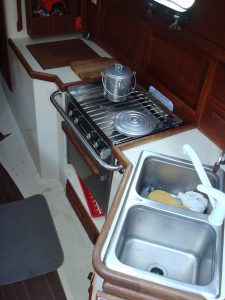 Up on deck, Bert checked for moisture with a hammer and moisture meter.  The deck is composed of two layers of fiberglass sandwiching a layer of plywood.  If any kind of water gets into the wood core (through holes where fittings are attached), the wood will rot.  This will severely weaken the deck and cause the fiberglass to delaminate.

No signs of moisture were found.  This is good!

Most of the rigging was found to be in pretty good shape as well. 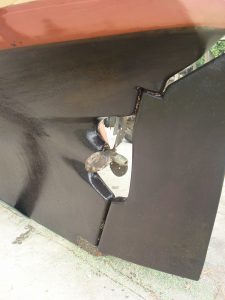 Sailboat engines are for the most part seldom used.  So when do they usually fail?  While docking or in close quarters.

As we arrived in the boatyard marina and brought the engine to near idle to motor down the congested fairway, the overtemp warning horn sounded.  There was no doubt to anyone in the marina that our engine was too hot!

We made it to the crane and killed the engine.  The bottom was recently painted and still clean, and everything checked out good.  After putting her back in the water, Frank, the mechanic at Captain Sam’s Boatyard, took a look at our engine.  He tightened some belts, took a look at some bearings, and we were on our way.  It’s a temporary fix and I’ll probably have to rebuild the water pump. 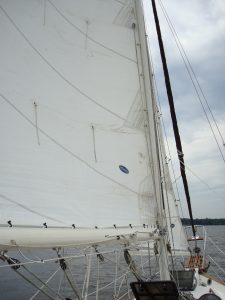 Mainsail and staysail raised, after furling the jib. All control lines are led back to the cockpit.

Once we cleared the marina, we raised the sails, cut the engine, and sailed back to Washington.  All sails were in good shape.  She tracks well, is easily balanced, and comfortable.  She should be a pleasure to sail! 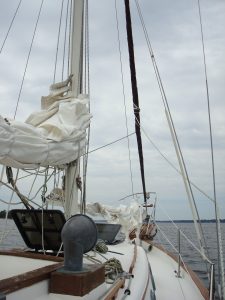 After dropping the sails, returning to the slip

Once we arrived back at the slip, the electrical system was checked out.  There were some clear signs that a previous owner had done some hasty electrical work – wire connections were bare in areas that were be exposed to water, and an AC outlet had the neutral/hot wires backwards!  More projects for me to do!
There were a number of small things found that need to be fixed or could be improved.  But these are all things that I could handle myself.  Besides, I enjoy doing projects like that, I’ll learn a lot about the boat by doing so, and I’ll have control over the quality of work done.

Next – handing over the money and signing the papers!  Stay tuned for more news!