I didn’t think I’d be back here at the airport to fly home so soon.

If you caught my last post you know that I was on the fence about taking Saoirse sailing. I had a jury-rigged engine, a compromised foredeck hatch, and only a few weeks left to play. I was going to make the decision today, Monday.

On Sunday I made an early decision to go. The weather looked good this week and so what if I only had a month on the water. I wasn’t going far and I was already down here.

And then one of you, my readers, saved me. Not online; Etienne is working on a boat here but has been reading this blog for years. Last night he stopped by to say he noticed something from a distance that I hadn’t noticed. One of my spreaders was flat while the other was properly angled slightly upward. Like a dope I never stood back far enough from behind to notice this. I was too focused on other things.

The spreaders are small spars that hold the upper shrouds away from the mast. The upper shrouds are basically what hold the mast up and keep it laterally aligned. There are tremendous forces on the windward spreader while sailing; the full sails are trying to pull the mast down while that little wire shroud is holding it up, exerting all that pressure on the spreader. My mast would most likely come down if it failed, and since I was only carrying five gallons of usable diesel I would have been in for an experience I’d rather not have.

Don’t mind the crooked radar reflector, that damn thing is coming off next time I take the mast down. The small things on the shrouds above and below the spreaders are remnants of spreader boots that rotted in the past two years of storage. But something here clearly isn’t right. I sighted my mast for straightness from the deck but never took a cursory glance from a distance. 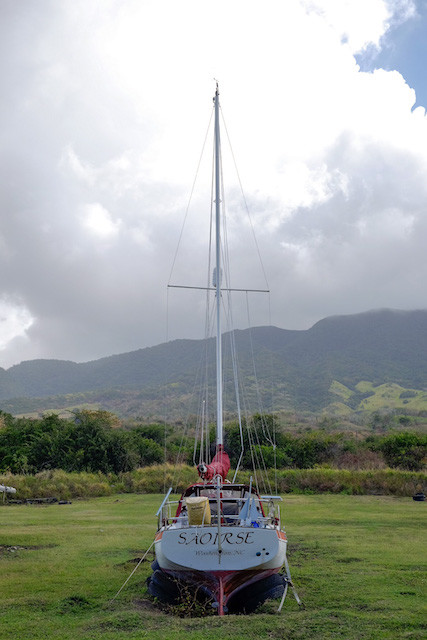 Mast health is second only to not having an excessively leaky hull. I climbed the mast for an inspection after hauling out last time but missed this. It was hard to notice close up and without knowing you were looking for it.

So I climbed the mast twice this morning to inspect & try a few things.

The clamps that held the spreader in place had come loose. I took a mallet and gently pounded the spreader upwards. I could only get it to move two degrees up and still had five to go.

The spreader just didn’t want to go up, even with the shrouds loose. So I examined the spreader base and it looks like it could be damaged. It’s impossible to know without disassembly.

I could have just tightened the shroud clamp to hold the spreader in place but that doesn’t address what could be going on at the base. That’s not how we do things with the rigging. “Those are the rules,” Etienne agreed as I gave him extra vegetables this morning. They need to come off for a proper inspection, along with the base.

There’s a possibility I could fix this without taking the mast down but I’m just about due to take it down for routine maintenance anyway. It’d be a weeklong job if it went smoothly, further eating into my time. I’m certainly not going to launch & haul for only 2-3 weeks of sailing.

Could I have seen this when I first arrived and had time to fix it so I could go sailing now? Probably. Lesson learned. Doesn’t do any good to dwell on it.

So I’m homeward bound. I could make the repairs now but I’d rather wait til after hurricane season, just in case something gnarly happens.

The only ticket I could get for the next week was for a flight leaving five hours after getting down the mast.

Glad I have a layup checklist made up, and I keep some semblance of organization. Made it to the airport with an hour to spare.

She’s secure and ready for me to return as hurricane season winds down.

Of course I had a timeline this time too. But I gave Saoirse a thorough inspection up and down, fore and aft, inside and out. No more surprises keeping me from Panama! More importantly, no expectations. I’ll get to Panama when we’re ready. If repairs happen quickly next time, great, I’ll launch and head west. If they take another three months, so be it.

In the meantime: ~2,000ish-mile road trip this week and next. I have to do something fun this month! Lassen NP, Crater Lake NP, Redwood NP, and the PCH through Fort Bragg, Santa Cruz, Big Sur, Monterey, Carmel, and Morro Bay.

Did you sell the Orion?

Still have it...just abandoned for now :(

The sad thing is that, when I bought it in 2011, I was completely 100% aware of things like this and that boats usually spend more time in repair than sailing. I’ve just stayed in denial about it :)