Once upon a time I had a dream…a dream to break away from the soul-destroying routine that is American life.

No, I wanted to go sailing.  So I started reading.  And before I knew it my dreams became reality.

These are the books that inspired me to realize this dream, and books that I still read from time to time for both entertainment and education refreshers!

Sterling Hayden was an actor known for his roles in The Godfather and Dr. Strangelove.

But what most people don’t know is that he had a lot of contempt for acting.  He really only did it to fund his sailing voyages.  He told Hollywood, his ex-wife, and a judge to shove it and took his children to Tahiti on his schooner.  This book recounting his voyages reads like a work of art.  Hayden is a romantic and you won’t be able to put this down.  One of my favorite quotes comes from this book:

“I’ve always wanted to sail to the south seas, but I can’t afford it.” What these men can’t afford is not to go. They are enmeshed in the cancerous discipline of “security.” And in the worship of security we fling our lives beneath the wheels of routine – and before we know it our lives are gone.
What does a man need – really need? A few pounds of food each day, heat and shelter, six feet to lie down in – and some form of working activity that will yield a sense of accomplishment. That’s all – in the material sense, and we know it. But we are brainwashed by our economic system until we end up in a tomb beneath a pyramid of time payments, mortgages, preposterous gadgetry, playthings that divert our attention for the sheer idiocy of the charade.
The years thunder by, The dreams of youth grow dim where they lie caked in dust on the shelves of patience. Before we know it, the tomb is sealed.
Where, then, lies the answer? In choice. Which shall it be: bankruptcy of purse or bankruptcy of life? 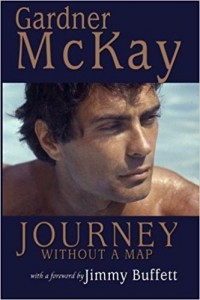 Journey Without a Map, Gardner McKay

Gardner McKay is another adventurer-actor, starring in the 60’s series Adventures in Paradise.  The show was about a war vet who sails to the South Pacific.

McKay was, in fact, already an accomplished sailor with multiple ocean crossings by the time he took the role.  He wasn’t just an actor; he spent time in the jungles of South America with aborigines, raised tigers in southern California, and traveled Egypt.

This book is about a man who, like me, lost interest in conventional careers and just wanted to go where the wind blew.  He finished his memoirs as he was dying of cancer and his widow saw them through to publication.  Forward by Jimmy Buffett. 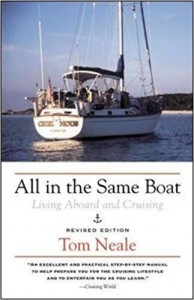 All In The Same Boat: Living Aboard and Cruising, Tom Neale

This lighthearted memoir about a family growing up on a 53′ motorsailer paints a vivid picture of the realities of giving up the comforts of land to live aboard a boat.  The good, the bad, the smelly, the beautiful, the dangerous…everything you’ll encounter.  Earning a living, schooling your children, provisioning for voyages, handling bad weather, and so much more.

Neale has written many other sailing books and his daughters, now grown, have gone on to do the same.

Tristan Jones is a sailor’s sailor.  One of those old salty types you’d see around the docks, the kind you’d offer to buy a beer in exchange for hours of captivating stories from sea.

He’s put these stories to paper, and while he admits there is a fair amount of “poetic license” you can’t help but wonder which parts of the stories are true.  Jones, like Sterling Hayden, is an artist when it comes to writing.

Encounters is my favorite of Jones’ books; he’s also written Saga of a Wayward Sailor, Seagulls in My Soup, The Improbable Voyage, Yarns, and many more. 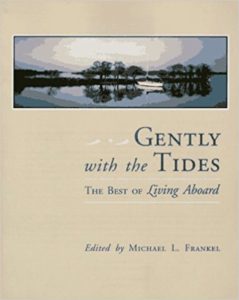 Gently With The Tides, compiled by Michael Frankel

Back in the early days of modern living aboard, a small group of dockmates started The LIVING ABOARD Journal.  The publication grew and had a cult following with contributors from all over the world sharing their stories of living aboard boats.  One of the editors of this publication has compiled some of the best articles from the journal into this book.

Gently With The Tides contains dozens of anecdotal stories about the realities of living aboard, including stories about choosing a boat, anchoring, bringing the family aboard, cooking, etc.  Great advice for anyone thinking about going afloat. 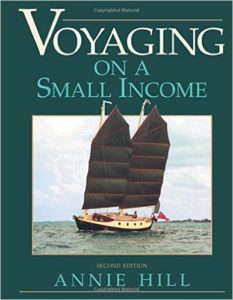 Letting it all go to live the life of a nomad can be tough financially, especially if you still rely on some sort of active income.

Voyaging on a Small Income will give you some insight on how to live on an extremely small budget – like $2,000 per year.  Now, that’s a bit extreme (mine averages around $6,000).  But there are some fantastic pointers in this book to apply to your budget, and not just your sailing budget.

Minimalism is a mindset that can apply to your life on land as well.

The Pardeys are legends in the sailing community.  They’ve sailed near a quarter million miles in different boats over the past few decades.  They’ve written a number of books detailing their experiences, and not just in memoir form.  They’re all educational based on things they’ve learned along the way.

The Self Sufficient Sailor should be the first Pardey book you read, followed by The Capable Cruiser, The Care and Feeding of the Sailing Crew, Storm Tactics, and more. 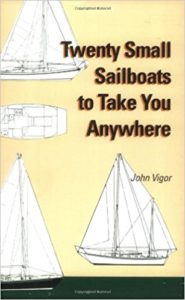 This was the first book I bought when I started looking at…well, small sailboats to take me anywhere.

While I didn’t end up with a sailboat featured in this book (though Pacific Seacraft had 3 of the 20 in here) I did take what I learned in this book and applied it to other boats I was looking at.

The sailboats featured in this book range from 20 to 32 feet and start at a price of only a few thousand dollars.  Vigor interviewed owners of these boats and included their feedback in the profiles. 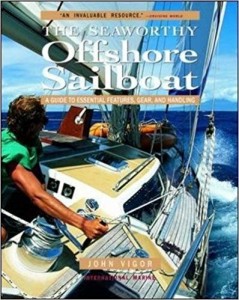 Seaworthy Offshore Sailboat is the perfect companion to Vigor’s other book mentioned above and the logical sequel to it.  This book starts off with some sailboat construction characteristics that you should look for in a bluewater cruiser.  Most of the book speaks to outfitting and handling a sailboat in open ocean.  You’ll learn about rigging, navigation, self-steering gear, anchoring, and so on. 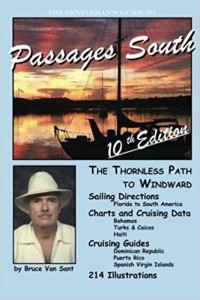 Ready to start sailing now?  This is a must-read especially if you’re going to head down the east coast of the United States and on down the islands.  This route is often called “the thorny path” because it’s almost all to windward and can be uncomfortable to say the least.

Van Sant lays out his strategies for dealing with this in easy-to-understand directions.  What time of day to sail, what weather to look for, which routes to take…they’ll all make your passage that much more comfortable.  Even if you’re not headed down-island you can apply these techniques to your journey.  Learn some other nifty tricks and great recipes in this book sprinkled with some entertaining humor.

Sailors, what else is in your library that you’d like to recommend?  Leave your suggestions below.

We read all these books, and found them all useful. And then we did it! And spent 13 years sailing the US, Caribbean and Europe before we got too old. Kept some of them to remind us of our marvelous adventures later on. All the books by the Pardeys were especially helpful.

I’ve loved many of William F. Buckley, Jr.’s books about his sailing adventures. Two that come to mind are ‘Atlantic High’ and ‘Racing Through Paradise.’

I’ve heard of his books but haven’t read them yet - I’ll put them on my personal list to read, thanks!

We have always enjoyed Herb Payson's books. The last one we have is "you can't blow home from here". And of course the Smeeton's writing was super.

Ah I love that book title. Thanks, I’ll check them out!

Most of these are by male authors/sailors. Might I also suggest "The Curve of Time" by M. Wylie Blanchett? While not exactly a sailing memoir per se, it encourages one towards exploration, adventure and casting off the bowlines.

Certainly! The absence of female authors was in no way intentional. I've never heard of that but I'll head over to Amazon to check it out - thanks!