The decision to leave Bequia for Dominica

I was just getting that itch to go, you know?

Bequia is great for such a small island. I did a lot of walking around, visited the Old Hegg Turtle Sanctuary, did some diving (where I did see my first hawksbill turtle but not one from the sanctuary), and visited as many bars and restaurants as I could. But man, it just gets expensive! I mean no offense to the island of Bequia, and I will be back because of the great people and places there, but it just feels like a cruise ship/charter boat stop. Caters to those with a lot of money. Me – not a lot of money.

Once I did as many “free” things as I could, what are my options besides sitting on the boat all day? I couldn’t even really work from the boat because the “bay-wide” WiFi reliability seems to heavily depend on the tides, rainfall, barometer, etc.

I had about three weeks left before I had to be back in St. Kitts to haul Saoirse out of the water and return home. Would I spend another three weeks sitting on my boat in Bequia or make a “reconnaissance” visit to another island?

My plan was to focus on Grenada and the Grenadines this year and then Dominica and Guadeloupe next year. Dominica, the “nature island” of the Caribbean, deserves more time than I could give it on this cruise – but why not make a quick stop by to say hello at the end of it?

I knew the winds would be blowing and the seas built up in between the islands but it wasn’t anything I couldn’t handle (and not near anything my seaworthy boat couldn’t handle!). However, if I waited any longer it was only going to get worse for as long as the forecast went out. So I kinda had to leave Bequia, and a few days before the Regatta. That was a tough choice but it was the right one after a lot of thought.

Sailboats getting an early start from Bequia towards St Vincent

Sailboats getting an early start out of Bequia, heading north with St. Vincent on the horizon.

Anchors up at first light and with ten other boats leaving at the same time. It was rainy and gusty most of the first day and cleared up right around sunset.

I stood off from St. Lucia and Martinique by about 10-15 miles to the west and this kept me in some calmer waters (Atlantic exposures were about 8-9 feet), but I had just enough wind to sail at a respectable speed. In between the islands though, I was certainly feeling those waves and the 25-knot winds gusting to 30! My staysail and two reefs in the mainsail kept me near hull speed for a good portion of it. 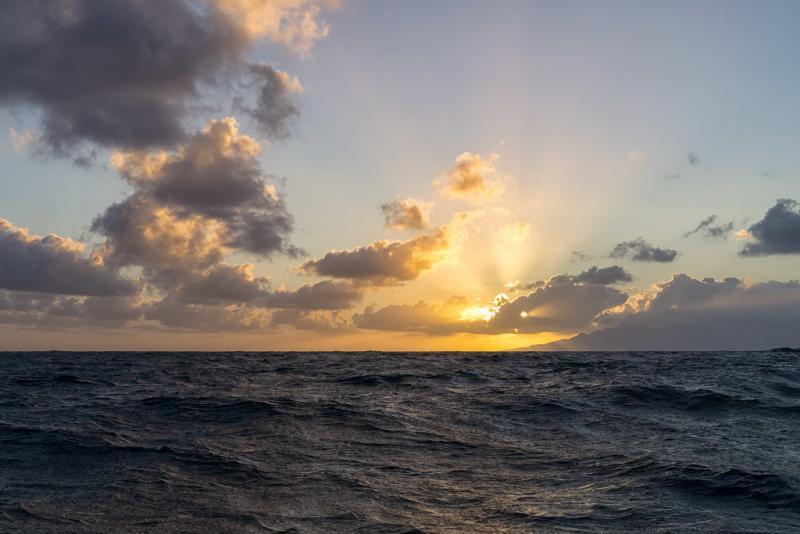 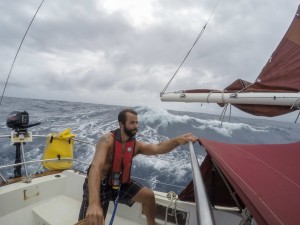 It certainly provided for those infamous sailor’s ups & downs. Safely behind an island with 15 knots of wind? I love this! In between the islands with 8′ breaking waves and 30 knots? I’m so tired! I must have raised/doused my jib over a dozen times within 36 hours.

Fortunately the skies were mostly clear at night with a full moon…and I can’t remember the last time I sailed under a full moon. Bahamas 2012? The clouds seem to be brighter at sea than they are on land during a full moon. No flashlights or headlamps needed, and rogue waves have a tougher time sneaking up on you.

I only managed less than two hours of sleep (broken up into 15-minute naps) between all the sail changes and dodging just enough big ships spaced out at inconvenient intervals. I was pretty beat coming into Prince Rupert Bay, Dominica. 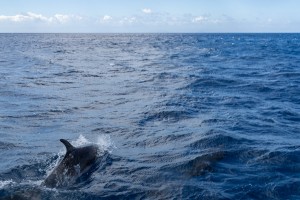 The dolphins were there to greet me and led me into the bay, and once they broke off I was met by Bonto who offered to take me up the Indian River before I leave. The Indian River is considered the “Amazon of the Caribbean” and was the one thing, if I could do only one thing on this short trip, that I wanted to do. So I agreed and once he finds another small group to put me with I’ll be making the tour.

I anchored just off the town of Portsmouth near the fisheries dock. This area had a shady reputation with a fair amount of crime in the past. Not good for business once the word gets out on the coconut telegraph! But a group of locals who depended on cruisers for their livelihood were fed up with the crime, and so they created the Portsmouth Association of Yacht Services (PAYS). They make their presence known, patrolling the bay and their members offer services such as laundry, trash collection, taxi tours, and hiking guides. St. Vincent & St. Lucia, time for you to follow suit!

Portsmouth is a really neat town. Seems like one of those places I could just walk around forever, stopping in all the little shops, shooting the breeze with the Rastas on the street, and taking pictures of the colorful old wooden buildings. It has a very genuine, Caribbean feel to it as it wasn’t a town built around tourism.

After clearing customs I stopped by a hole-in-the-wall for lunch, restocked some basic groceries, and went on back out to the boat to take down my “quarantine” flag and hoist the Dominica flag. Oh, and about clearing customs…fees in Dominica are EC$6 (about US$2.25). Compare that to the roughly EC$40 in most other islands, some of which have to be renewed every month! And since I’m staying for less than two weeks, I was able to clear out at the same time I cleared in, saving me a trip to their office when I depart.

Time to start making my list of all the things to do for the next time I come back! What would you have to add?

I did shoot a lot of video on this passage, so keep an eye on this site and the various social media outlets (linked at right) for an update when it’s all compiled and published!