Up bright and early today to pack up the tent and get on the road. Despite being so close to the PCH, I found last night’s campsite at San Simeon quite peaceful. I wanted to make the detour around the mudslides and arrive back on the PCH while I still had some morning light and moody fog. California Highway 46 from near Cambria made me want to go back to Ireland for some reason. The highway gives you some great views of Morro Bay and Morro Rock.

View of Morro Bay and Morro Rock from CA46

There are a couple of ways to detour around the PCH slide areas; I ended up taking Nacimiento Road. It drops you off just south of Limekiln State Park and adds 2.5 hours to what would otherwise be a five-minute drive.

Like the day before, I drove up and down this section of the highway while fog shifted and lighting changed.

Plaskett campground at the south end, where campers are crammed in right next to each other, was just starting to wake up and it appeared all spots would be full this night. Nacimiento campground, at the junction with Nacimiento Road, is a small campground with a little more privacy but all spots were reserved. I didn’t really want to stay at these campgrounds anyways – I had my sights set on Limekiln State Park – so I continued north to Limekiln, arriving at around 10. The attendant asked me to come back at noon as they can’t release any campsites until then.

In the meantime I drove up to Lucia, stopping for a few photos, ate some lunch, and drove back down towards Plaskett to walk the bluffs. There are a number of pullouts along the entire way to take in the views from the car or after a walk. 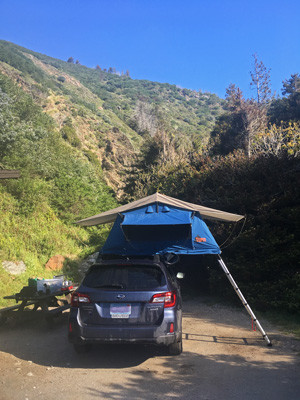 At 1153 I left Plaskett for Limekiln and milked the accelerator to arrive at Limekiln at exactly 1200. I’ve still got it, from the days when I could put a bomb on a target at the precise second it was requested to arrive!

Anyways, Limekiln has some beach sites, where you’re more in an open parking lot, and redwood sites up in the shaded forest. I was able to reserve one site in between, right next to the creek, on a hill with views of the ocean, and with no neighbors. Once I settled in I went for a hike up in the redwoods. The two main trails go up to Limekiln Falls and the historic lime kilns.

The lime kilns themselves are four massive, towering iron furnaces from the late 19th century. A nearby limestone deposit provided thousands of barrels of lime for constructing buildings in booming San Francisco. The limestone was purified in these hot furnaces and then transported to ships on the coast. After knowing this, you kinda look around and wonder how the hell they got all these large barrels down the steep terrain to the rugged coast where they were somehow loaded onto ships in the rough waters. It was quite an operation! Informational markers along the entire coast provide history and illustrations to give you a better idea of how this was achieved. The kilns were shut down in 1900 when both the limestone and surrounding forest was stripped clean.  The land was transferred to California State Parks in 1995 and was almost lost in a 2008 fire.

The sun decided to come out for this hike, but the shade of the redwoods and the nearby creek kept temperatures down. There’s a lovely contrast between the reddish trees & trail and the green ferns & redwood sorrel lining the trail. I spent a couple hours exploring the trails & kilns, including an unmarked spur trail that gives you a nice view of the PCH bridge over Limekiln Creek. This little unmarked spur looked like I might have been able to take it all the way to my campsite but it dead-ended at an open viewpoint. The hikes themselves are fairly easy; the largest elevation gain for the main trails is only 225 feet with a roundtrip distance of only a mile and a half.

Approaching Limekiln Falls. Sunny and crowded, I decided to return early morning to photograph it

Because of the short hike, I just ended up hand-carrying my new MeFoto RoadTrip tripod since I knew I’d be using it for most shots in the dark forest. It’s slightly larger and heavier than my old Sirui tripod but was still small enough to carry by hand without a problem.  I still wouldn’t do it for longer hikes. I carried my X-T1 and three lenses in my Think Tank Speed Demon, using it as a shoulder bag today.

Photographing in the forest on a bright sunny day isn’t usually ideal for me. The old X-T1 has some great dynamic range, but the high-contrast scenes aren’t my thing. I usually prefer more diffused, flatter light while in the woods. For that reason I’ll be doing the hike again early tomorrow morning – maybe we’ll get some spooky fog!

VIEW PHOTOS FROM HIKING THESE TRAILS THE NEXT MORNING

The day was capped off by walking down to Limekiln beach for the sunset. Turns out the sun just barely hides itself behind the northwestern bluffs as it sets. Everyone else at the campground had the same idea, and there’s enough room for everyone at this small beach.