I wrote a post about desalination systems for small cruising sailboats in 2015 while I was planning my return to the Caribbean.  I looked at how the systems worked and which kinds would best suit a small sailboat like mine.

I eventually settled on the Katadyn 40E and installed it upon my return to the Caribbean.

Overall, I was very happy that I invested in a watermaker.   Fresh showers every day?!  Yes please!

I have no regrets with the Katadyn 40E as it seems to be the perfect desalinator for a small cruising sailboat.  Minimal power requirements and low output was perfect for a solo sailor (and I imagine a couple too).

I’ve been getting some questions about its performance so I’ll attempt to answer them here.

Why did you get a watermaker?

I wanted to be more self-sufficient.  I tend to favor remote locations where fresh water isn’t readily available.  If it is, it isn’t cheap, and schlepping around those heavy water cans is a pain in the ass.

My integral water tank holds 40 gallons.  That’s enough to last almost a month with minimal water consumption.  Once the tank starts to empty, the boat starts to list to starboard a noticeable amount.

It sure felt nice to be able to rinse myself down with fresh water every day, something I couldn’t do before I had a watermaker!

How much power does it draw?

I ran it for three hours every two days, so I had to budget six amps per day for it.

Before I finished the plumbing I had the desalinator lines coming from under the settee and into a 5-gallon can. I could fill it up halfway in a couple hours and after using a significant amount of my daily electrical budget.

Did you use it at anchor too?

Ehh yes.  I know you’re not really supposed to and I see why.  I only had the one inline filter and that turned a nice slimy green after about a month.

I did my best to run the watermaker during the rising tide so that in theory I’d be getting fresher seawater and not the gross stuff further inland.

I’ll be getting another prefilter to install on the intake next time I’m there.  You’re supposed to run this for long periods while on passage, and there aren’t really “passages” in the typical, short hops in the Caribbean.

Is the advertised output accurate?

Yep!  I was right at 1.5 gallons per hour with a clean filter.  As the filter aged I noticed the output slightly less but nothing really to write home about.

As mentioned earlier, I operated it for three hours every two days.  The first half hour was to flush stagnant water out of the system (I’d save this for laundry & cleaning water) and the final 2.5 hours went into my tank.  This gave me about 3.75 usable gallons every two days.  At that rate, my water tank stayed at just about the same level for months.

I’ve heard it’s a maintenance nightmare.  Is that true? 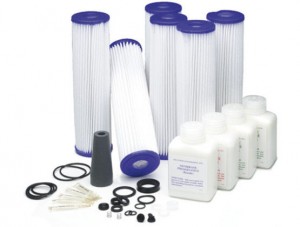 I never had any problems with it but then again I only used it for five months.  There’s the standard maintenance for all watermakers – oil, grease, inspecting o-rings & bearings – but I never had any malfunctions requiring any extra work.  The preventative maintenance that I did do was minimal and straightforward.

The “pickling” process – getting the watermaker ready for storage – was easy and the directions were very clear.

Now, you also don’t want to get caught with your pants down when you need fresh water and are nowhere near any other sources.  So you do need to carry an ample supply of spare parts and chemicals.  These take up some room and will cost you some more hard-earned money.

I think “noisy” is relative.  I installed the unit under my settee.  Yes, I could definitely hear it, but it wasn’t annoyingly loud.  I really had to concentrate to hear it while I was up on deck.

Do you have any other questions to add to the list?  Or comments about using the system yourself?

Thanks for the review

This is really interesting. Thanks.

Great post as always John. I've been planning on a PUR40 for my own Pacific Seacraft Orion, and now I'm convinced there won't be any buyer's remorse (as there is with sooo many other products these days).

I'm departing Seattle on a solo circumnavigation in about 14 months. This is going to be a life-saver for me.

Thanks, I hope you don't regret it either! There is one really negative review on Amazon but it sounds like the guy needed to produce on the order of 15 gallons per day - this isn't the watermaker for those demands! I hope the outfitting is going well!

We found this guide for the Katadyn PowerSurvivors to be essential: http://ishipaco.com/katadyn/docs/WatermakerBook.PDF

One thing it says that's germane here is to rotate clean filters in each time you run the watermaker. That will eliminate the "nice slimy green" issue you ran into.

Great guide, thanks! Yes, Caribbean anchorages are the worst. I'll try not to be so lazy next time and replace/clean more often :) Cheers!

I don't like the PUR.. would go with spectra but they are more expensive and need more room. Depends on why you want the water maker. If its just for drinking water its fine but to fill up larger tanks takes forever. A 120 volt system is even better, can run it off a inverter or honda generator and have enough for a shower or to wash clothing.

Thanks for the feedback on the PUR! I'd definitely go with a bigger watermaker if I had the space for it. One of my cruising friends has a Spectra powered by a big generator and it's awesome for showers and laundry - but they're on a 50' cat and I'm on a 27' monohull...