Did I mention how much I hated living in a boatyard?  The insects have a lot to do with it.  Spiders on the boat, ants crawling up the drains, and mosquitos finding their way inside by who knows how.  If you’re careful those things rarely happen out on the water.  I had a new experience Sunday night though, and right as I was getting ready to make dinner.

It started out when I noticed a large winged insect circling the one cabin light I had on.  Then there were two.  I looked over at the portlight under that light and saw some more insects swarming outside, waiting to get in.  Not knowing what they were, I thought to myself, man I’m glad those screens mostly work. 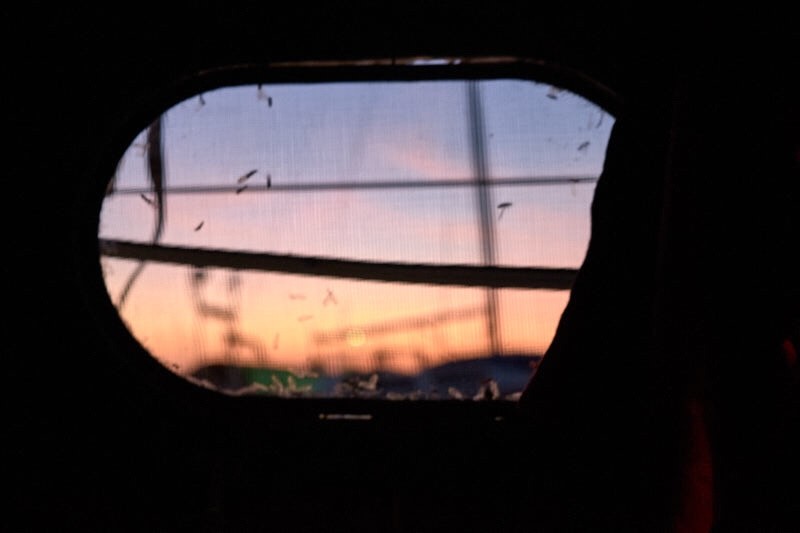 But then I looked over at the screen covering my companionway.  Thousands of insects were swarming right outside, and some were working their way in.  I felt something in my hair and looked up.  Insects had made their way through the cracks of my companionway hatch and inside my boat, dripping from the ceiling.  But these had shed their wings.  Shit, termites. 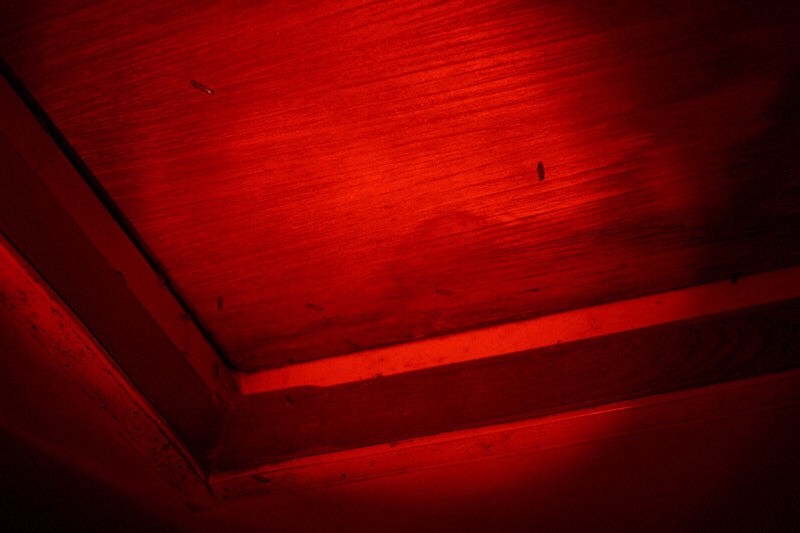 I quickly turned off all of my lights.  I closed what portlights I could; I couldn’t close the companionway because the hatchboards were outside and I’d let the whole swarm in if I went out to get them.  Not that it mattered; by the end of the night the whole swarm wound up inside my boat anyways.

Where to even start containment?  I just started stomping on all the ones that wound up on my floor.  As I did that, I could feel even more falling onto my head and back.

Knowing that bleach can kill termites, I grabbed a spray bottle full of it and just started spraying the floor, the screens, and the companionway hatch.  It almost sounded like it was raining inside my boat.  No, that was just termites falling from the ceiling. 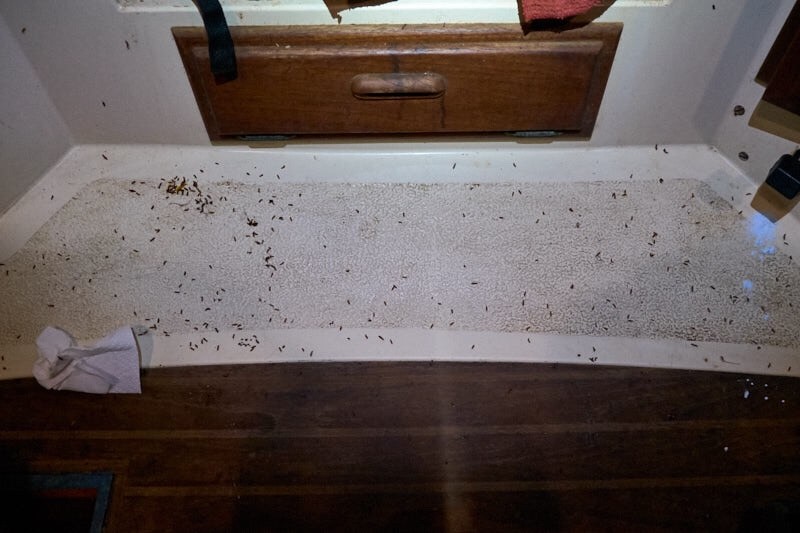 Some movement over on my bed caught my eye.  They were all over the sheets and crawling behind and inside my pillow.  I’m not sleeping here tonight!

I could barely keep up with them.  I’d kill ten and twenty more would fall from the ceiling.  Fuck it, I’ll figure out where to sleep tonight and I’m going home tomorrow.  Even though this boat is fiberglass, it has more wood than most any other fiberglass boat.  Is this a sign that they’ve already eaten everything I can’t see?

I didn’t know much about termites.  Some research following the massacre told me that these were drywood termites.  They swarm during dusk in the springtime looking for new wood to colonize.  The winds were light this night, they saw my lights, and they came over to check it out.  So they were new arrivals, and there were no signs that termites have been here before (that I know of).  Phew, looks like the boat might be saved.

Once it appeared they were all inside, I grabbed a paper towel and just started stamping out every termite I could find on the floor.  The ones that found their way to my settee I just grabbed with my fingers, pinched, and threw to the floor.  One after another.

Pictures can’t do it justice.  If you’ve seen how large a swarm of drywood termites can be…yeah, they were all inside my 20′ x 7′ cabin and finding their way into every crevice they could.

Things finally started to slow down.  I was starving, and had been at this for over an hour.  Hundreds of dead termites covered my floor, either smushed, pinched, or doused in bleach.

Time for a break.  I poured some rum, made some popcorn, and put on a movie.  I remembered I had some “Roach Prufe” boric acid powder, and read that works on termites as well.  I sat back and watched my movie, with my rum and popcorn, as the remaining termites rolled around in the boric acid powder I spread on the floor.  They’ll bring it back to wherever they decide to colonize and infect the rest of the colony.  The acid will disintegrate them from the inside out.  A few termites walked over my laptop, and they were quickly pinched and thrown to the ground. 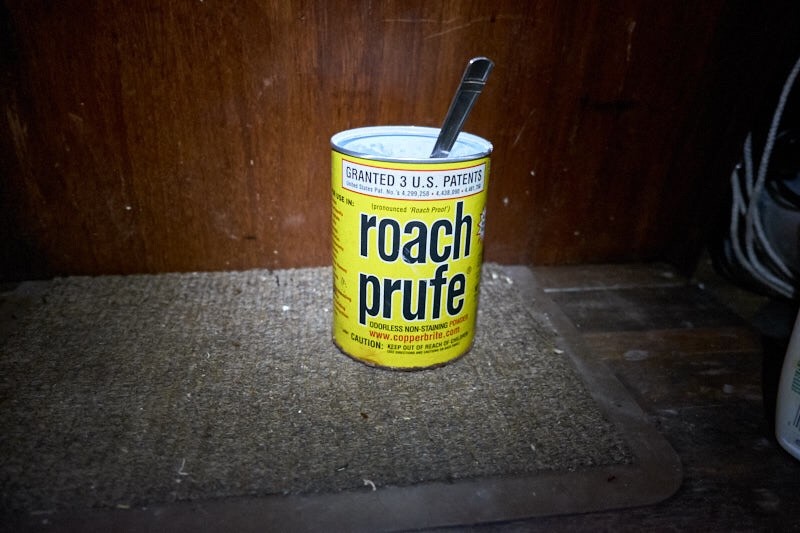 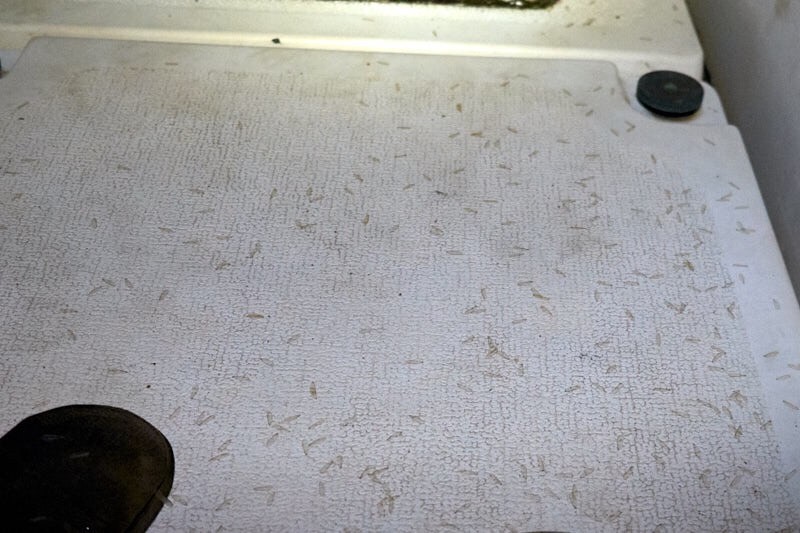 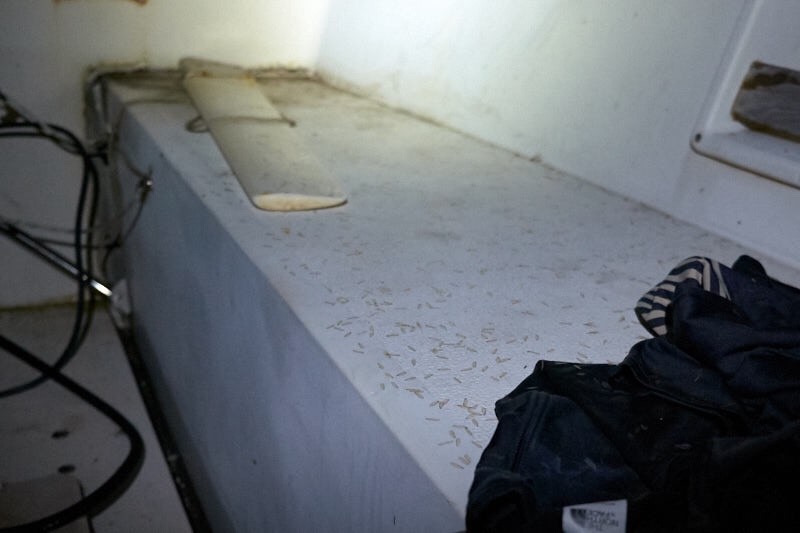 By the end of my movie I could barely see any survivors.  Maybe one or two walking over my sheets, but I could handle that.  I swept up the carnage that had accumulated on my floor and took a shower.  There didn’t seem to be any left in my bed once I shook out my sheets and pillow, so I deemed it safe to sleep in the boat that night, but I had the hammock ready to hang up outside (with the mosquitos).

I woke up the next morning and just saw lifeless black dots all over the floor…none were moving.  Did the survivors burrow into some teak?  If they did, hopefully they ate some of that powder so I won’t have to worry about them for long.  Whenever the winds would pick up I’d just see clouds of shed wings floating everywhere.  I spent the day cleaning up all the carcasses and powder from the inside and the remaining piles of wings from the outside. 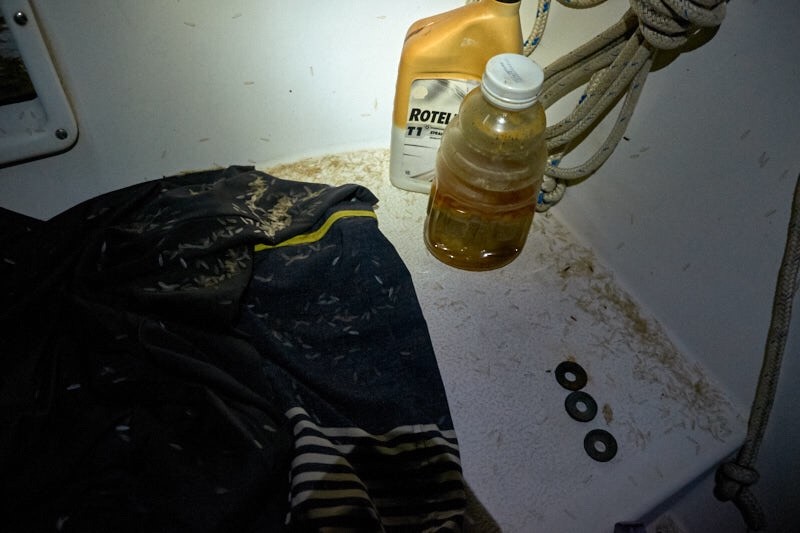 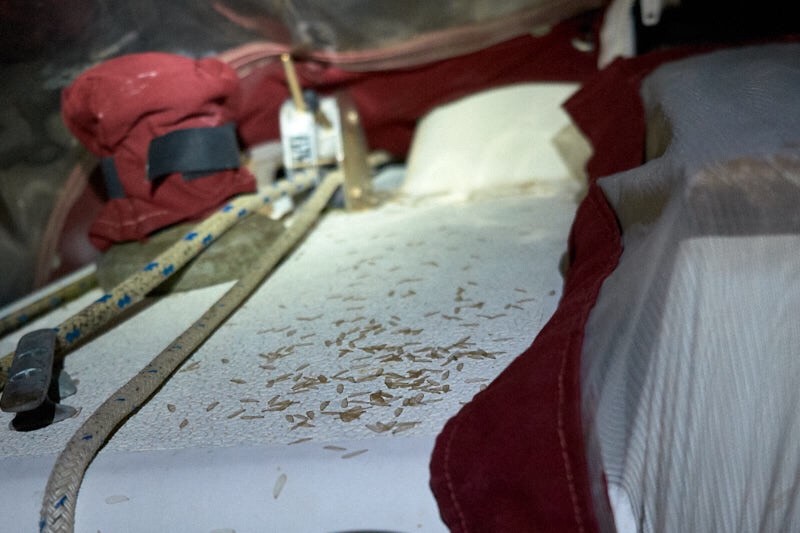 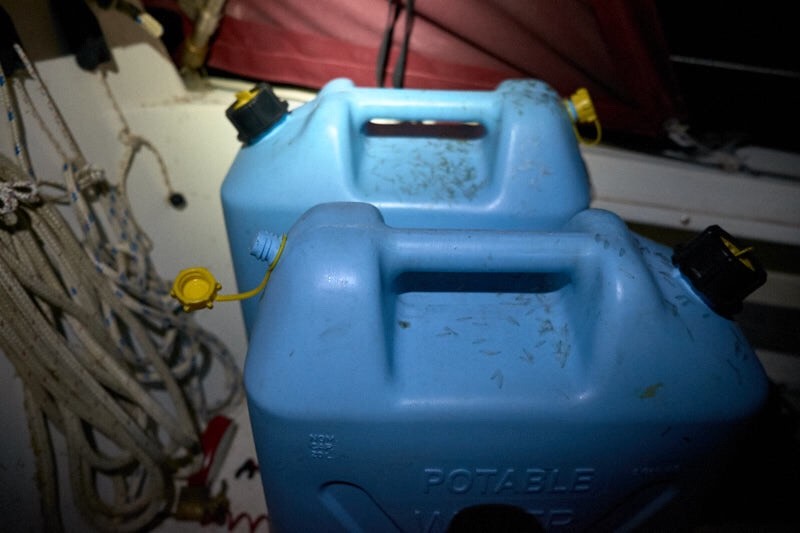 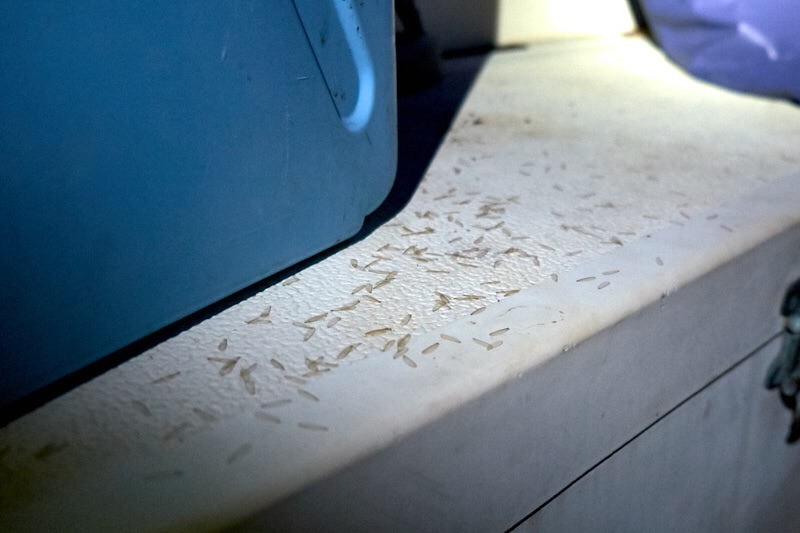 The winds were light again the next night.  I prepared as best I could.  The bleach spray was out, all hatches were prepared to close at a moments notice, I had tape ready to seal up cracks, and I kept the lights off.

As the sun inched closer to the horizon I waited patiently, like some king waiting for the barbarians to make their nightly attack, ready to defend my castle.

There were maybe a dozen holdouts, remnants from the night before, but that was it.  Will another swarm hit before I can get back in the water?

Update March 24th…they came back. I let my guard down and had all my lights on at dusk. A smaller swarm started to approach. I was at least able to shut all the hatches, and even though my sliding hatch isn’t sealed, I was still able to block off all entrances except one small opening where I was able to effectively kill each one as they entered…hundreds of times.