UPDATE 7/9/2015: I just got back from three weeks on the John Muir Trail, where camps are between 9,500′-11,500′ and the water used comes from snow runoff.  The Esbit just wasn’t the right tool for the job – at that high altitude, and with starting to cook with such cold water, I rarely got the water to a rolling boil.  This will continue to be my favorite stove in warmer conditions and lower altitudes, but for colder, higher altitudes, something like a Jetboil Zip will work better.

There are three types of trail chefs:

I’m a Dried-Food Water Boiler but carried enough gear to make (insert your favorite dish).  In my quest to trim ounces, I gave the Esbit Lightweight Camping Cook Set

a go on my last outing. 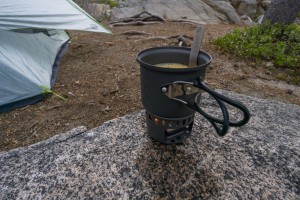 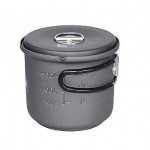 My previous backpacking camp stove setup was a Snowpeak Gigapower stove, Snowpeak Hybrid Trail Cookset, and 110g isopropane fuel canister.  Combined weight was about 18.7 ounces, and the cookset didn’t double as a mug so I had to carry a mug also.  It cost well over $100.

Many canister stoves like this are advertised as “ultralight backpacking stoves” because they only weigh a few ounces, but once you add in the fuel and cookset you’re up to over one pound.

What I like about the ~$25 Esbit stove cookset is that the whole thing is only 7 ounces, including a pot that doubles as a mug, and I only need to carry fuel for the meals I plan to cook – I don’t have to waste space and room carrying around an entire canister just to cook two meals.  Each tablet weighs 0.5 ounces and is roughly one cubic inch.  This in itself makes it an ideal portable camping stove.

The tablets burn at a fixed heat of approximately 1,300 degrees F and they’re very easy to light.  Advertised useful burn time is about 12 minutes; I found they’ll burn for about 25 minutes but the last half they’re not putting out as much heat. 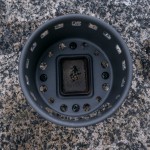 It took about nine minutes to get the water to a boil though it never fully got to a rolling boil; it’s certainly enough to be useful for cooking though.  This was on a windy day at an altitude of 7,000′, starting with water from a cold lake.

The fuel burns clean without any odor, smoke, or residue – see the picture at the right.  Other tablets will burn with smoke, smell, and a waxy residue, so I recommend using the Esbit fuel tablets linked at the top of the page.

The tablets can also be extinguished and relit later.  One thing I’ll try next time is recycling a used tablet to initially heat up the water, then use a fresh tab to bring it to a boil.

When you’re done with the fuel, your only trash is a small blister pack.  No need to carry around an empty fuel canister.

Drawbacks of the Esbit Stove

The fuel can be difficult to find.  I’ve relied on mail-order for fuel, which comes in 12-pack containers.  These need to be shipped as “flammable materials”, but is a fuel tab in a blister pack any more flammable than the materials it’s shipped in?

It’s not useful for much more than boiling water, 16 ounces at a time.  You can’t really simmer anything unless you just let the tablet burn down, but you have no control over that.

Cooking with an Esbit Stove 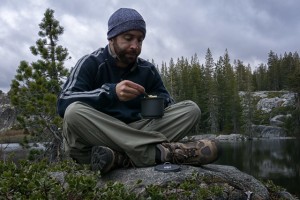 Out of all the setups I’ve used, this seems to be the best backpacking stove for what I cook.  It’s small, light, and clean.  Backpacking meals you can make with the Esbit camp stove:

These are what come to mind for me, and will give me the calories I need.

Despite its drawbacks, I still think it’s truly a great option as a lightweight backpacking stove simply based on the fact that it’s all integrated.  I’m going to stick with it for the entire season.  If you’re ready to try it out, the here’s the best deal

Do you have experience with it?  Or recipe ideas?