I failed at my solar panel setup – while my boat was in the yard on St. Kitts for 18 months, something happened in the electrical system and my panels stopped float-charging the batteries.  So my nice, expensive Lifeline batteries were dead after only one year of use!  Improper charging isn’t covered by the warranty so here I am, out shopping for a new battery bank… 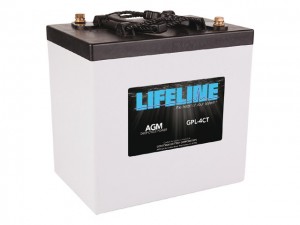 The battery compartment in my boat is very small.  It’s like this on all small cruising sailboats.  Previous owners had a Group 27 100 amp-hour house battery and an engine starting battery.  One hundred amps wasn’t going to cut it for cruising; I needed at least 200 if I was going to be living aboard.

So I managed to cram two Lifeline GPL-4CT 6V batteries AND a starting battery in this space with no room left to spare.  Combining these two 6V batteries in series gave me a 12V house system with 220 amp-hours (still on the small side for amperage).  They worked pretty well though I had a hard time keeping them topped off with my renewable energy setup (see Windpower).

As a replacement now I want something a little more robust, or I should say cheaper.

My options of getting sailboat batteries in St. Kitts are fairly limited.  My only choices are Lifelines, as I had previously, and the Exide Edge.  Replacing the two Lifeline house batteries would run me $975 in St. Kitts, plus $520.30 for a starting battery – almost $1,500 (though slightly cheaper in the U.S.).  What?!? 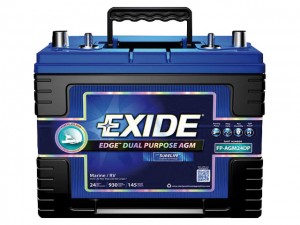 What about Exide?  They make a dual-purpose deep cycle AGM battery.  They’re 12 volts, 75 amp-hours, and smaller than the Lifelines, and cost $250.35 a piece in the Caribbean (around $195 in the U.S.).  I’d need three of them to get a 225 amp-hour house bank.  The three of them would only cost $750, but because they’re advertised as “dual purpose”, I could, in theory, use them as a boat starting battery.  A solution half as expensive as my previous setup.  Too good to be true?

Deep-cycle batteries are designed to handle heavy loads for long periods before needing to be recharged.  They can be repeatedly discharged to half of their capacity without shortening their life.  They’re great for sailboats, especially for cruising sailors, who are living aboard and operating many DC systems like lights, refrigeration, a stereo, etc.

Deep-cycle batteries have thick plates inside that can withstand heavy discharges and are excellent at regaining their full charge if utilized properly.

Starting batteries are like what you have in your car.  They have much thinner plates, and more of them.  The increase in surface area provides a higher amperage to turn the starter, but because of the thin construction they are discharged quickly and will not fully recharge if left in a low charge state.  They won’t last if used on house circuits in a sailboat because of their low tolerance for deep discharges.

People generally will not recommend this, and the reason is that all engines are not created equal.  Some engines will start with a normal deep-cycle battery while others will only start with a proper starting battery.  This is why you’ll always hear “you should have a house battery and a starting battery”.  A starting battery will guarantee enough amperage to start any engine found in a sailboat (there’s another catch I mention later).

Let’s look at the specs of my previous starter battery and the Exide Edge Dual Purpose.

Cold Cranking Amps (CCA) is the maximum load the battery can handle at 0 degrees F for 30 seconds without falling below 7.2 volts.  Marine Cranking Amps (MCA) is the same test conducted at 32 degrees F and is usually somewhere around 125% the CCA rating.

We see that the Exide already has more CCA than the Lifeline, and since I’ll have three batteries connected in parallel, the amperage is tripled, giving us roughly 2,325 CCA.

Starter motors usually have an initial inrush current of around 1,000 amps for 1/4 second to get the motor going, and is then at its normal load.

My Yanmar 2GM13 has a 1.2kW starter motor, which draws 100 amps on a 12V system (running the starter for five seconds will consume 0.14 amps).  Yanmar recommends using a battery with a 200 CCA rating for the 2GM series engines – our CCA is tenfold.

These small engines don’t take much at all to get started, and can therefore be recharged quickly by the engine’s alternator.

Even larger engines like a 20-25 HP diesel, at the bigger end of engines found in small cruising sailboats, recommend around a 500 CCA rating.

The other reason people don’t recommend using your house bank as your starter also is because you must properly care for your batteries!  If you let your battery bank get too low, your engine will not start!

Use good practices of never letting your batteries dip below their 50% capacity (112.5 amps in my case).  This will prolong their life and leave some juice for starting when you need it, like when you’re dragging anchor on a lee shore.

This configuration requires special attention.  Always turn your battery switch to OFF when the boat is unattended (I have my bilge pump on a separate circuit so it’s always powered).

Your batteries should also be within arm’s reach of the engine (as recommended by Yanmar).  If the batteries are any further away, the current loss in the wiring will be too much and it’ll take more to get the engine started.  However… 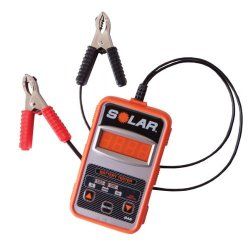 Your batteries also like to be at room temperature.  Putting them in the engine compartment will reduce their life.  A separate, vented compartment, close to the engine, is a good solution.

You should regularly test your battery capacity to identify batteries that might be going bad (I never did this).  A cheap ($43.40 with Amazon Prime) battery tester is the SOLAR BA5.  You tell it what your battery’s CCA rating should be, then it tells you what it actually is, with a simple LED indication of Good/Bad.

Yes, you could do this also.  A Lifeline Group 27 battery will deliver 575 CCA – lower than the Exide Dual Purpose, but still enough to start a small diesel.  And if you have two of them to get a 200 amp-hour bank, that will double your CCA.

I just don’t have this option where I’m at.  Being limited to either the Lifelines or the Exide, I can get more amperage for the space in my battery compartment, and at a cheaper price, by using the Exide.  Your situation may be different in your boat and if you have more battery brand options.

I also like the redundancy of having three 12V batteries.  If one should go bad, I can still manage with two until I can get a replacement.  I didn’t have this option with my two-6V battery setup.

John, I consulted my diesel mechanic who helped me refurbish the little Yanmar on my 1985 PCS Orion II (a sister ship of yours). He said that the engine needs a battery setup with about 400 CCA to crank it with some reserve. I installed two Lifeline Group 31 AGM's--105 amp hours each. They were just a tad large for the battery area, but hang over the edge by about 1/2 inch and are securely strapped down. My mechanic warned me away from Lifelines, saying "our boatyard is littered with 1 yr old lifelines that have gone bad". The basic problem is that overcharging can dry out the gel mat, which makes it unable to hold a charge. Lifeline provides some clear instructions on the bulk, absorption, and float charging. When I compared that to my Xantrex 29 amp shorepower charger, and also the Morningstar PWM charge controller, their default settings were both too high. They killer seems to be the absorption rate, which needs to be set at 13.4V and most default chargers run 13.7-13.9V. The Xantrex has some dip switches to change charging voltages for different temperatures, so I just chose the temp setting that provided 13.4V. The solar charge controller was a little more complex. I had to order a USB to telephone jack interface and download software to adjust the charging parameters of the Morningstar Duo charge controller. I was able to go in and set up the correct voltages. I did this in 2015, and the batteries did fine their first season and worked great this past summer.

The only challenge would be the old 35 amp alternator on the Yanmar. It charges at 14.3 volts, which is OK for bulk charging to replace the current drain from the start-up, but this one doesn't taper off....it just keeps pumping out the 14.3 V. At this point it's not a huge issue, as I usually run my engine less than an hour at a time. I am still in the working world, so my cruising adventures are limited to 2-3 days on the Chesapeake. When I settle into longer cruising, I would probably need to upgrade the alternator to one of the "smart" ones that can taper the voltage as the battery comes closer to full charge.

It could be that your Lifelines died due to extended use of the engine for charging underway or extended motoring, or that your solar charge controller was set too high. I forget whether you mentioned earlier what your alternator and solar controller setups were....

I'll let you know in the spring after re-commissioning how the Lifelines survived their second season of use and wintering over. Hope to see Saiorse in a Caribbean anchorage some day!

I almost went with the Group 31s but didn't for the exact reason you mentioned there, not fitting too well. I think you're right about the overcharging, my charge controller, which also fried around the same time, didn't have many adjustment settings. My new one is much more efficient and safe. I do only run the engine for about the same time as you, really for just getting into & out of harbors, so I'm trying to rely on renewables a lot more. I'll put the blame on the charge controller. You better hurry up and get to the Caribbean! When I go down this fall I'm going to position it closer for crossing the isthmus on my subsequent trip after that. I think I'll go hang out in the Sea of Cortez for a while... Cheers!

Two points: 1. We had a hand crank wind up starter that started the engine regardless of battery charge. Think those manual starter are still around. 2. Two fairly flat 12 volt batteries can be wired in series to boost the voltage which may be enough to turn over a starter motor. This is a one time option, otherwise you will burn out the starter motor over time. Oh, and 3. Always best to go with 12 volt rather than two 6 volt batteries. Greater holding capacity. And of course 4. an in water prop driven generator while underway will provide continuous charging of your systems, and in the trade winds, will supply normally well in excess of what you are consuming.

I loved my towed water generator! But I sold it because I just wasn't making passages long enough to really get much out of it. I do have a hand crank starter on my little Yanmar. I've only used it once. Successfully, for starting the engine, but it left me with a bunch of bloody knuckles! The space just isn't big enough to get good turns in without injury.