So I’m convinced that YouTube crashes the internet in Carriacou, or at least in Tyrrel Bay.  I tried uploading my Carnival video a dozen times, connected to a few different routers, and as soon as I did the internet stopped working.  Now that I’m in Bequia, exactly one month after posting this, I finally got the video up.  You can scroll to the bottom to check it out if you want to bypass the reading.

I sailed up to Carriacou just a few days before the official start of the 2016 Carnival with no idea what to expect. I mean, I’ve seen videos and pictures from Carnival in places like Trinidad and Brazil, but every place does things differently. Though the holiday itself originated in Europe just after the Dark Ages, it has a very Caribbean flavor now.

My biggest regret was probably not having a historical background of Carriacou’s Carnival before attending. It would have made so much more sense to me! So if you’re heading to Carriacou for Carnival – pay attention! 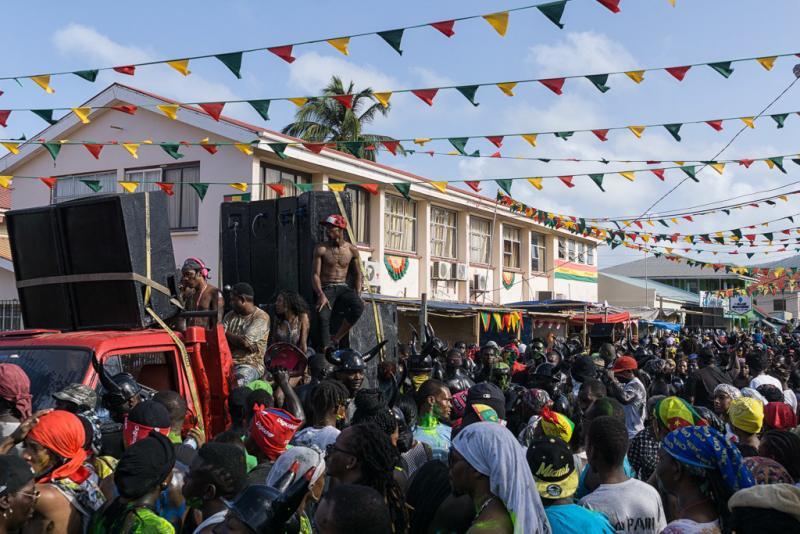 The jab jabs making a pass through Hillsborough during j’ouvert.

Carnival in Carriacou traditionally starts after Midnight Mass at the beginning of Lent. The streets start to fill up at around 4am with the j’ouvert (pronounced joo-vay). J’ouvert has two types of people – participants and spectators. Participants are covered in oil and paint, and, well, some of that just naturally gets on the spectators but not to the same extent. I started off as a spectator until some friends brought me into the middle of the mess and I quickly found myself being painted by folks who have been drinking since God knows when. This is why I don’t have many pictures of j’ouvert – I was just barely able to get the rain cover on my camera bag before it got covered in oil and paint. 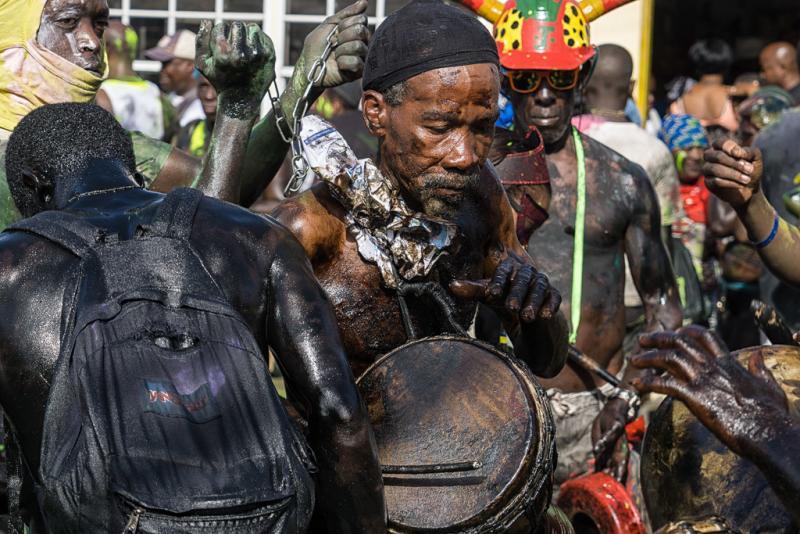 The jab jabs drumming and chanting during j’ouvert. The black oil, drums, chains, and horns all have roots from the days of emancipation.

One particularly interesting part of j’ouvert is the jab jab.

I noticed quite a bit of men wearing horns and covered in motor oil and grease. Some were covered with little more than loincloths and some of those had giant phalluses attached to them. Some were carrying chains, some had drums, and some had fish hanging out of their mouths. Hell, one guy was shoving a limp iguana in peoples’ faces, and I don’t think the iguana was just asleep. They marched around the streets beating their drums and chanting in tongues. I thought it was just a bunch of drunk guys acting strange – but that’s because I was ignorant going into this.

Jab jab is Caribbean patois for “double devil”. The tradition started in Grenada & Trinidad and quickly found its way to Carriacou, where the Kayaks (residents of Carriacou) and Grenadians created a jab jab different than that in Trinidad.

The jab jab is full of symbolism on many different levels. The tradition of jab jab started after emancipation. Slaves weren’t allowed to attend the Carnival celebrations of their “civilized” masters until after emancipation. Once they were allowed to attend, they crashed the party, so to speak. They covered themselves in molasses, tar, mud, and grease, wearing as little clothing as possible, and danced through the streets to their own music with dances considered obscene to the Europeans. Many of them carried snakes to both shock the crowds and to honor the African gods of fertility; many of them also carried chains to rub their freedom in the faces of the white colonialists. They also wore headgear with horns, symbolizing association with the devil.

But who was associated with the devil? Them or the white colonialists who enslaved them for so long?

The jab jab continues today in much the same tradition as a social commentary on both the past and present. 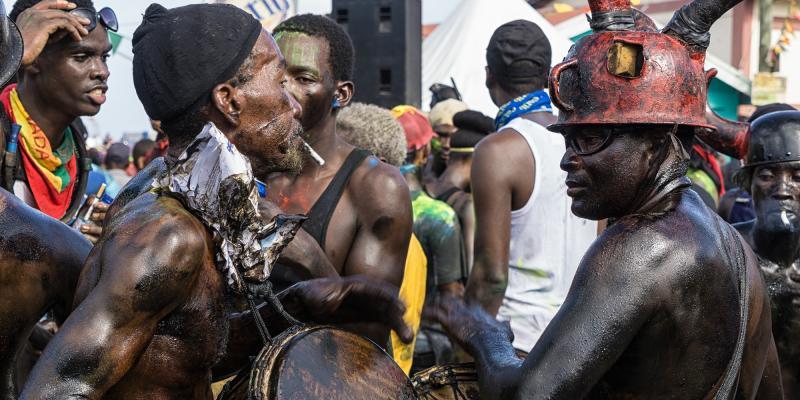 The jab jabs drumming during j’ouvert.

J’ouvert eventually gives way to the Parade of Bands. This is what you typically think of when you hear “Carnival”; groups of bands dressed in brightly-colored costumes making laps through the town.

Other participants include the “knee highs”, groups of men in loose clothing, covered in mirrors, who walk around the villages chanting and throwing baby powder into the air. Another group – I can’t remember their name – is also present all day, stomping around the streets dragging pots to symbolize chains, wearing hoods and wire masks to symbolize stolen identities. 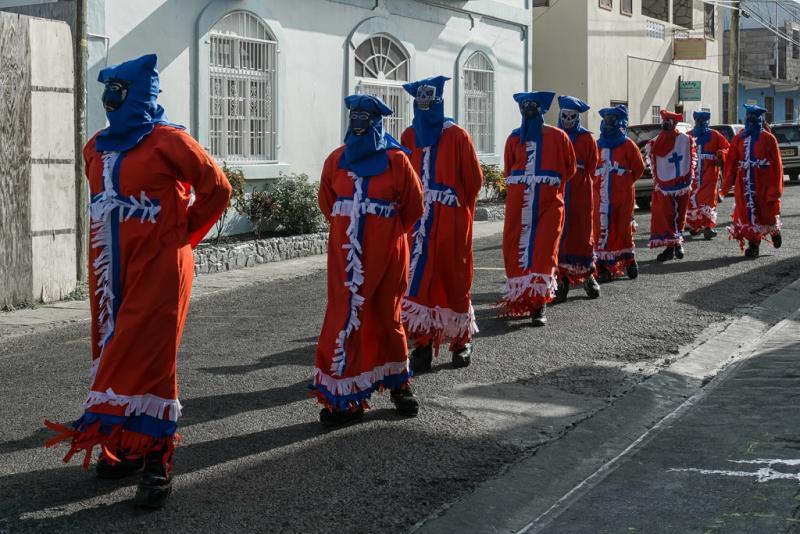 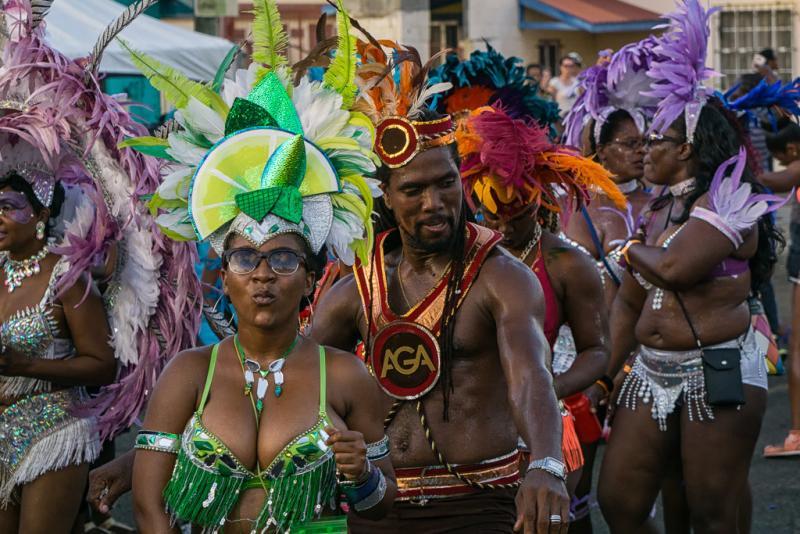 The Parade of Bands through Hillsborough.

This parade lasts well into sundown and eventually gives way to the Monday Night Mas’. This is a jump-up of sorts, the blackness pierced by fluorescent glow sticks, loud music, and dancing through the streets of Hillsborough. It was really just getting going when I left around midnight – after getting to Hillsborough just before 7am.

Another j’ouvert takes place at Paradise Beach in the wee hours of Tuesday morning. I barely managed the one on Monday so I sat out the Tuesday j’ouvert and caught up on sleep back out on the boat. But at 10am it was back ashore and into the village of Brunswick for Shakespeare Mas’. 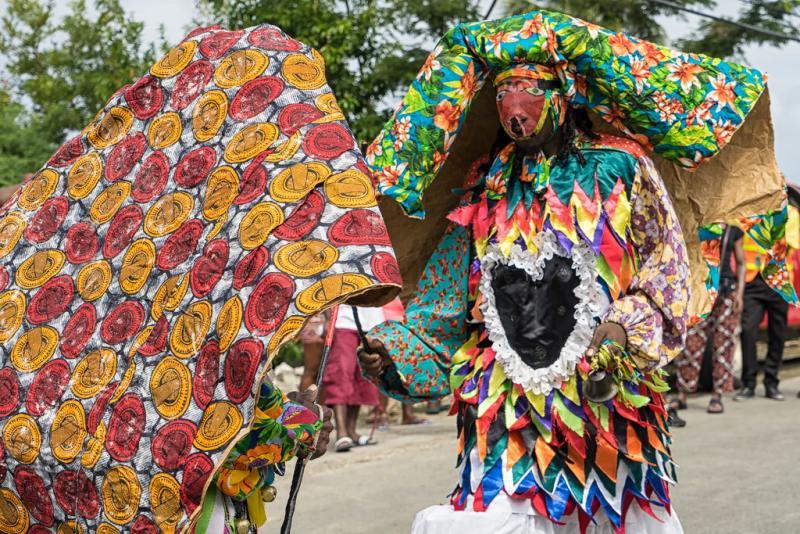 Shakespeare Mas’, like jab jab, is a colorful and entertaining display mocking past injustices.

Slave owners would make their slaves perform popular plays for them or recite passages from literature, knowing that they’d falter. And when the slaves would falter, the masters would flog them with sticks.

The Shakespeare Mas’ during Carriacou Carnival is unique to Carriacou but may seem familiar to other festivals where men go around reciting poetry and plays.

Pairs of men, dressed in bright robes of west African tradition and wearing wire mesh masks, go from village to village reciting Shakespeare’s Julius Caesar. That’s right, Julius Caesar. When someone makes a mistake, they’ll get flogged over the head with sticks. Today they wear padding on their heads and padded capes to absorb the blows.

It’s a dying tradition here, as I overheard some of the organizers saying that the younger generation isn’t taking this up. Indeed, almost all the men I noticed doing this were much older.

I can’t wait to get the video uploaded – it’s a wild sight to see! 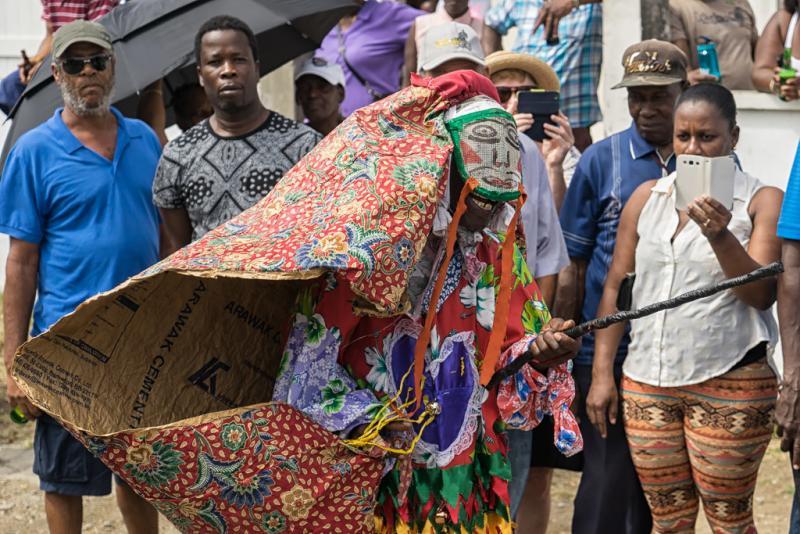 Shakespeare Mas’ finally ends up in Hillsborough, just before another Parade of Bands and the “Final Lap” takes place. It’s around this time that you’ll see most people heading for the ferry dock – Carriacou may have a population of roughly 8,000 people, but the Carnival population more than doubles and the majority of participants are from Grenada. Grenada has its own Carnival in August.

I’d really love to be back for another Carriacou Carnival. It’s so much more than the party that I thought it was – it’s a multi-day commentary on how men have treated each other in the past and how we should be treating each other today.

And it’s tough to photograph! A lot of the action takes place 1) in the middle of flying paint and oil, 2) at night, and 3) hidden behind crowds of people. Be ready for it!  I sure as hell wasn’t.

And finally, prayers are with the families of those lost when a powerboat capsized trying to get up to Carriacou from Grenada. As of this writing I still can’t find an accurate number of people lost at sea – it’s somewhere around 5-10. No one can say for certain right now because it seems that people just piled into a boat and took off without any kind of accountability.

Be safe out there and see you next year! 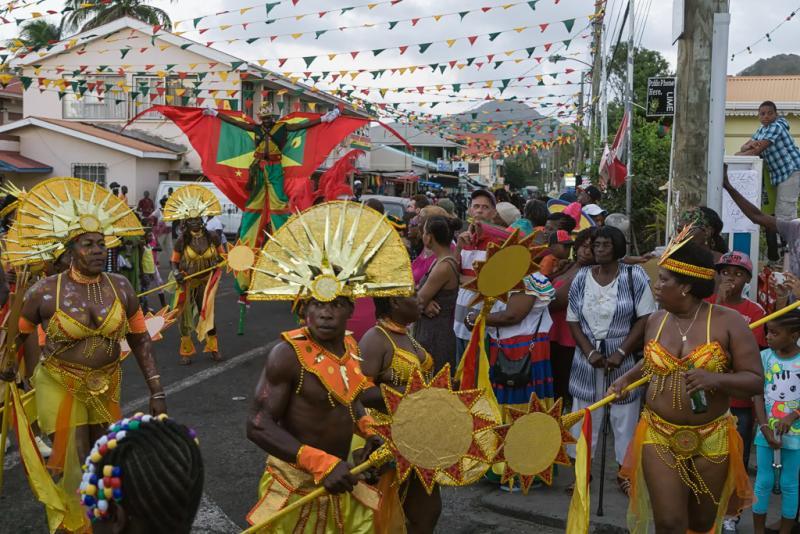 The Parade of Bands making another lap through Hillsborough.