This is one of those hidden spots you could easily drive by without even knowing about it.  It’s not much of a secret though, so I don’t feel bad publishing anything about it.  It is a historic site though, so please do your part to help preserve it for future generations!

Routing the railroad over & through Donner Pass 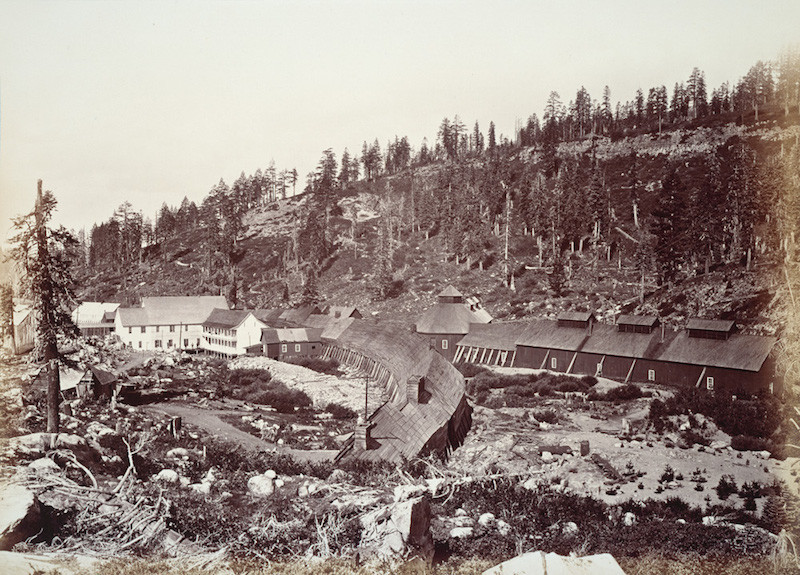 Catch the final season of AMC’s Hell on Wheels television series?  Most of the season takes place in Truckee.  It’s a fictionalized account about how the Central Pacific and Union Pacific Railroads joined in Utah in 1869, finally connecting the west coast to the rest of the country.

The biggest obstacle getting to Utah was at present-day Donner Pass.  The steep, rocky terrain prohibited track from going over the pass and no one thought train travel was possible.  Wagons used this pass and could barely even make it, let alone large, heavy trains.  Theodore Judah, chief engineer of the Central Pacific Railroad, envisioned the track going through the mountain instead of over it.  Wouldn’t you know it, everyone thought he was crazy!  It was really the only way, and construction started in 1866.

The workforce was made up of 12,000 under-compensated Chinese laborers.  Working conditions were terrible; their camps & food were nothing like their white counterparts and they were only paid a fraction of the white men.  Countless Chinese died during construction of the Donner Pass railroad, and when you visit you’ll see why.

Construction of the main tunnel, Tunnel #6, was started concurrently from three locations to expedite construction.  The Chinese used hand drills to make holes in the rock; then they filled these holes with the new, very volatile nitroglycerine compound.  Lateral construction proceeded from both the west and east portals.  A vertical shaft was excavated to permit construction from the center as well.  This shaft took almost three months to complete before work could begin from the center of the tunnel.

There were a few other small sections of tunnel that needed to be excavated also, but none as long as the 1,659-foot Tunnel #6.  Railroad bed also needed to be cleared from the side of the mountain between these smaller tunnels before descending into Truckee.  One small section between Tunnels 7 & 8 required the construction of a stone wall to shore up the railroad bed.  This is called the Chinese Wall and still looks today like it did in the 1860s (with the addition of some graffiti!).

Looking up at the Chinese Wall

The Donner Pass segment was finally completed in August 1867.  The first passenger train ran through the tunnels in June 1868, from Sacramento to Lake’s Crossing (present-day Reno).  The final train ran through the tunnels in 1993 when service started going through a new 10,322-foot tunnel to the south under Mount Judah.  Ironic the railroad would eventually be moved underneath the mountain that bears the visionary’s name.  The railroad cited costs of snow removal & maintenance for abandoning the older tunnel.  Eventually all the rail & hardware was removed to be recycled. 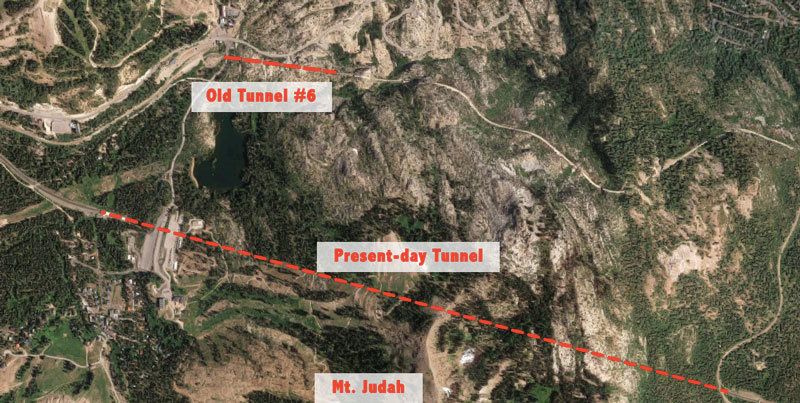 The old snowsheds of Tunnel #8 viewed from Donner Pass Rd

There’s a lot to do at the Donner Pass area and the railroad tunnels are just one more attraction to check out while you’re there.

There are two ways to access the railroad tunnels.  One is easy, the other is moderately difficult.  Naturally, the easy one is $5 for parking.

Easy access: Park in the dirt lot across from Donner Ski Ranch.  This is the lot immediately west of the Sugar Bowl Mt Judah Parking lot.  Last time I was out there I saw a sandwich board with the words, “Tunnel Parking $5, Pay at Donner Ski Ranch” but that was the first time I noticed it.  You’ll see the obvious west portal for Tunnel #6 on the far side of the lot.  Open Google Maps Directions.

Free (more difficult) access: There’s a very small parking area on the east side of Donner Pass below the Chinese Wall.  Open Google Maps Directions.  A small stone marker at this parking area notes the Chinese Wall above it.  There’s very limited parking opportunities along the highway if this lot is full.  From here there are two ways up to the tunnels:

Chinese Wall parking area near center of frame; easier access on the left side of the frame

Chinese Wall marker with the lower & upper walls visible above

I’m partial to winter.  For a couple reasons.  I just love the contrast between the snow and rock, for photographic purposes.  There’s less people too.  And winter just really sets the mood with the numerous icicles spaced out along the tunnels and cold air.

If you go in winter: with deeper snow you may need snowshoes to get to and in between the tunnels.  When it’s really cold the water inside the tunnels will freeze also, making it slicker than an ice skating rink.  Something like Yaktrax might be a good idea to bring, or at least a trekking pole.  Be careful for icicles.  You’ll be walking through water in some spots if it’s not cold enough to freeze.  Bring appropriate footwear.

If you go in summer: go early in the day!  The parking lots fill up fast and you’ll have a lot of company in the tunnels.  You may also encounter water in the tunnels, so bring the right shoes and a change of socks.

General notes on exploring the tunnels

It’s dark in there!  Bring a flashlight or headlamp.  Especially for Tunnel #6 which has no other sources of light.  It can get a little creepy!

Flash strobes aren’t the best idea for photographing the tunnels.  The tunnel walls aren’t very reflective for bouncing light.  Tunnel #8 gets enough light through the snowshed slits you won’t need a flash.  But Tunnel #6 is dark, and the best way to photograph in here is with your flashlight.  Bring a tripod, set a long exposure, and paint the walls with your light.

Tunnel #6 is the westernmost tunnel.  This is my favorite tunnel just for the history, being the one that took so much effort so long ago.  About halfway through the tunnel you’ll see the shaft above you that was used to transport the Chinese workers, explosives, and excavated rock.  It’s tough to see though and you have to look for it.  The top of the shaft is closed off and located near the Mt. Judah parking lot.

Looking up at the vertical shaft used to construct the tunnel

Tunnel #7 is much shorter than #6 and is located near the underpass for the Old Donner Summit Rd.  These walls have been mostly smoothed with concrete and are covered in colorful graffiti.

Through Tunnel 7, looking towards Tunnel 6

Tunnel #8, near the Chinese Wall, is more of a snowshed than a tunnel though there are some very short sections that go completely under the rock.  The concrete enclosure, used to keep snow off the track, makes a great canvas for graffiti artists.  There’s some very elaborate graffiti art in there!  As well as the usual scribble, like “Fuck (insert name)”.  This enclosure proceeds for just over 3,000′ before coming to a short break in the snowshed and then continuing.  If you keep walking along this railroad bed you’ll eventually get to the present-day railroad line after 2.3 miles.  Over half of this is open though, and not very noteworthy.  Most people turn around after a half-mile.  There are two locations with “doors” in the snowshed where you can wander out to viewpoints of Donner Lake.

View all tunnel photos in my Donner Lake gallery

Any questions or comments about the Donner Summit tunnels?  Happy exploring!

Thank you for taking the time to put the pictures together and explaining the background behind them. I almost felt like I was really there exploring the tunnels with you.

I’ve been following the weather and it looks like a record year for snow in the Serra Nevada range. YouTube has been loaded with snow plowing videos of the railroads clearing the Tracks to keep the freight trains moving. Makes for good watching while sitting in your easy chair.