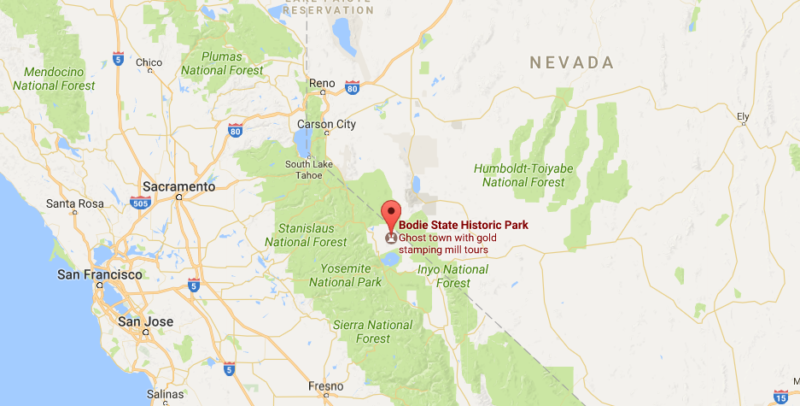 Bodie is probably the most well-preserved ghost town in California.  My last trip there was 1990ish (wow, so long ago!) so it was great to get back there again.  And it’s sad that it’s been so long since it’s only about 2.5 hours away from where I live in Lake Tahoe!

The Standard Stamp Mill and surrounding buildings from the west side of Bodie.

One of Bodie’s old barns with snow on the mighty Sierra Nevadas in the background.

Remains of the Swasey Hotel in Bodie, California

Inside the Miller House in Bodie, as it appeared in 1900. This is one of the few houses open to the public.

Bodie was named after W.S. Bodey, who discovered a small strike of gold in the area in 1859.  Bodey died shortly after his find but prospectors continued to work the area.  It was slow going for the next 15 years – the town itself wasn’t even much more than a camp during that time.

Then in 1875, a mine collapse revealed a huge load of gold ore.  Miners and businessmen flocked to the area.  The town’s population reached 10,000 within a few years, working over 30 mines and 9 mills.

The gold rush didn’t just bring miners – Bodie was home to every other element you’d expect in a western mining town.  It even earned the reputation as the wildest, most lawless town in the west.  Street fights, shootouts, prostitutes, Chinese opium dens, over 60 saloons…it must have been quite an experience!

Bodie’s rush was short-lived and pretty much over in 1881.  Most of the homes were quickly abandoned and remain in this state today.  Skeleton crews continued to work the mines until the last one closed in 1942.  The school remained open until 1945.

As you look upon the mass of abandoned buildings it’s difficult to imagine how big Bodie really was.  A fire in 1892 destroyed many of the wooden structures in town.  Then in 1932 a fire destroyed 90 percent of the town of Bodie.  What remains today is all that survived.  I have a hard time picturing how big the town really was before that fire wiped it all out.  Thankfully photos survived, and you can check them out in this Images of America book documenting Bodie’s history.

California State Parks purchased the site in 1962 from the caretaker.  The buildings are kept in what they call a state of “arrested decay”.  Buildings are maintained in the state in which they were found in 1962, and only maintained to the point of preventing them from falling over or otherwise naturally decaying.  Park staff reside in a few of the more stable buildings.  I wouldn’t mind that gig for a short while.

The Miller House kitchen, much like it appeared when it was abandoned in 1900.

The Bodie blacksmith shop, complete with anvil, giant bellows, and other historic items.

The Wheaton and Luhrs Store, which also housed the hydroelectric offices after electricity was brought to Bodie, and also a boarding house.

Lodging and camping near Bodie

There is no camping at Bodie; do not spend the night on state park land.  There are however plenty of options within an hour.  Freecampsites.net lists a good selection of free tent & RV sites; I camped out at the Chemung Mine up the road from Bodie, east of Bridgeport.  If you’re looking for a room, the Virginia Creek Settlement and Willow Springs Motel are right at the junction of 395 and Bodie Rd.  There are also a number of hotels 45 minutes south in Lee Vining and 40 minutes north in Bridgeport.

Car camping at the Chemung Mine, north of Bodie

Other things to do near Bodie