One of the coolest things about diving, or even just swimming in general, is sea turtle sightings. The most common turtle you’ll see in the Caribbean is the green sea turtle, but that’s just one of a few different species found in the bright turquoise waters.  It’s actually the only species I’ve ever seen over countless trips below the water.

So I was pretty excited to visit the Old Hegg Turtle Sanctuary in Bequia, a conservation effort for hawksbill turtles. The sanctuary is one of the top things to do in Bequia for visitors. It receives no funding from the government, relying on donations of EC$15 (US$6) per person.

I tried finding a little bit of information about the place before going and encountered some mixed reviews on far opposite ends of the spectrum. Some praised the founder for his efforts to save the critically endangered hawksbill, while others dismissed him as a phony looking for tourist money at the expense of the turtles. One article in The Vincentian written by an “anonymous environmentalist” says the sanctuary doesn’t deserve its name.  I had to see for myself.

Getting to the Old Hegg Turtle Sanctuary

I walked to the Old Hegg Turtle Sanctuary from Port Elizabeth. It’s about two and a half miles and takes just under an hour, mostly shaded except in the middle of summer when the sun is straight overhead. Looking at a map the sanctuary is located in Industry, but in reality it’s more or less really in the middle of nowhere – along a narrow oceanside road with nothing but scattered villas in hills covered in stands of coconut palms.

The Old Hegg Turtle Sanctuary was started by Orton “Brother” King, a native of Bequia whose family has been here for quite some time. Brother, now in his 80s, grew up on a traditional 18-foot fishing boat, sailing between Bequia and Grenada. He’d mostly dive to catch fish and turtles. He’d stop at intermediate islands like Canouan and salt his catches to preserve them, then proceed on to Grenada where he could get a better price for the meat. Then he’d sail back to Bequia.

Brother did this for over fifty years, camping with his family on the beach that is now home to his sanctuary. He got tired of all the killing, and seeing how fragile things were getting under the water, switched over to conservation.

With no formal training in marine biology or conservation, he went ahead and started collecting hawksbill hatchlings on the local beach before they could disappear into the ocean and, well, probably die within hours. That’s if they even made it to the water before birds would swoop in and pick them up. One in a thousand makes it to maturity in the wild, and various forms of human disturbance has been reducing the survival rate. He’s been refining his methods ever since he started, experimenting and figuring out what works. He’s now at the point where one in five makes it to maturity where he can release them in the wild.

Brother Orton and his turtles

The turtles are raised in various sized pools and are fed canned tuna for their first six months. After that, they’re fed small fresh fish that Brother catches with a net. Then it’s a waiting game – the turtles just swim circles in the pools for the next five years.

Turtles are normally solitary animals, but at the sanctuary they share pools. The pools aren’t necessarily crowded, but the turtles do end up biting each other. Other turtles may start to develop a fungus. To solve these problems, Brother has built small “hospital” pools where individual turtles can heal after being treated with medicine.

“They only bite the rear fins because they’re always behind each other. But those are their rudders. They don’t use them to swim,” Brother said, ensuring me that it does no harm for their survival.

I asked Brother what the Vincentian government is doing to protect these animals. What I learned from his response shocked me.

“You’re not doing anything to protect them if your turtle hunting season is seven months long. The fishermen, they go and they hunt my turtles. I see the piles of shells, my shells with the two holes I drill in them [in the back of the shell to tag them].” Brother continued very emotionally, “they’re my turtles and they’re being killed for food for seven months a year. That’s not protection.”

That’s gotta sting. I knew Bequia is granted some leeway for their traditions, like whaling. The International Whaling Commission allows Bequians to take two whales per year, but they often don’t even get one. They still hunt whales using traditional methods in small boats with hand-thrown harpoons, but it’s difficult, and dangerous, to kill a whale this way. Catching and killing turtles though, that’s easy. And the government allows them to do it for seven months a year, mostly without any enforcement or oversight at all.

Hawksbill turtles are listed as “critically endangered” on the IUCN Red List, meaning researchers have found an 80% decline in population over the past three generations.  The population trend is listed as “decreasing”.

His efforts may be for nothing if these turtles don’t reproduce. He can save them from a near certain death on the beach and populate the ocean with more of them, but it’s all in vain if they’re not reproducing. Brother should find an answer to that next year. Hawksbill turtles don’t reach sexual maturity until they’re 25 years old, and the first turtles he released will be reaching 25 next year.

“Next year will be my final test. If my turtles return to the beach next year to lay eggs, then I know what I’m doing is working.” He smiled at the thought of it. Divers do report sightings of his turtles, so he knows they’re at least surviving the wild.

But if they don’t reproduce? Many biologists say that the map turtles follow to return to their birth beach, the beacon they use, is programmed using their journey from the sand into the sea. If the hatchlings are taken before they wander into the ocean, will they know to return to the beach? If they don’t, then the endangered turtle population is actually in worse shape than before.

He may have to try something new, like expanding education across the island in an effort to curb human impact.  But that’s going to be a very tough feat on an island of turtle fishermen, and especially when the government doesn’t do anything to help. 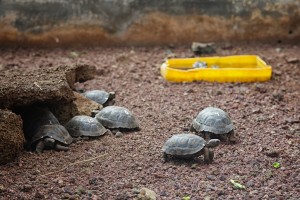 This facility is the only one of its kind in the eastern Caribbean but many other countries have similar programs, called “headstarting”. I saw a very successful program at Darwin Station in the Galapagos, where small, unique tortoise species from the various islands are kept in pens until they’re large enough to be released back home. The Cayman Islands, Venezuela, and Cuba also do something similar for sea turtles. Beaches on Trinidad have reported over a tenfold increase in the number of turtles returning to lay eggs ever since they started a conservation program there.

To date, Brother has released well over 600 hawksbill turtles into Bequia’s waters. The sanctuary is worth a visit – talk to Brother yourself, see the operation, and gather your own opinions. I like to remain optimistic about things and am eager to see if his turtles return to the beach. I’ll definitely be following up over the next couple of years!

What do you think about this program?  Is it helping or hurting the Hawskbill turtles?