I published a Facebook post recently about last year’s trip to Dominica’s Indian River.  Was that really last year?  No way.

But yeah, it just over one year ago.  It sure as hell feels like it was much longer since I left the Caribbean; so much has happened!  Let’s take a look at what went down in the last 14 months since that trip:

I haven’t forgotten about you!  Life has thrown me quite a few curveballs since then but I refuse to quit.  I will get Saoirse back to the Pacific one way or another, and at that time I’ll consider the first part of this journey complete.  So let’s take a look at how we’ll get there.

Projects for the sailboat 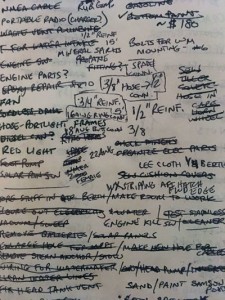 I made some good progress on my last trip – installed a watermaker, new chartplotter, replaced my depth sounder transducer, new solar charge controller & solar panel with new batteries, an electronic waste pump, and a new inverter.  Little things that as a sum improve daily life quite a bit!

I don’t have quite as much planned for this time, but they’ll definitely continue to improve life aboard:

I should be able to get back in the water quickly, as soon as I get back to where Saoirse is in storage in St. Kitts.

I’ll be heading straight to Dominica after leaving St. Kitts.  I made a quick stop through the island on my last trip as a scouting mission and it confirmed my suspicion that this is an island I need to spend some more time on!  Quiet, lush, beautiful, friendly…I could go on.  I don’t know how long I’ll stay but I’d like to explore every trail, beach, underwater preserve, and park, to include Morne Trois Pitons UNESCO World Heritage Site. Depending on the timing, I may or may not hit up Guadeloupe for a couple weeks.

Get Saoirse back to the Pacific, of course!  My two options for doing this:

Upon reaching the Pacific (yay!) my next big cruising stop will be the Sea of Cortez – 2,000 miles from Panama.  I’ve read Steinbeck’s memoirs, and although much of it is different now, much of it is still the same.  I’m really looking forward to exploring this remote area.

“The lovely thing about cruising is that planning usually turns out to be of little use.” – Dom Degnon